The Goochland Revolution: Making Growth Pay for Itself 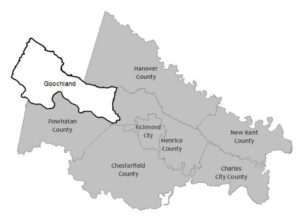 Ken Peterson, a leader of Goochland County’s turnaround from fiscal basket case to bearer of a AAA bond rating, thinks he has discovered the holy grail of fast-growth county governance: how to make development pay for itself.

In previous posts I described how Peterson and his fellow fiscal conservatives swept into power in the so-called Goochland Revolution of 2011 and began implementing strict financial discipline. The exurban county west of Richmond, population 23,000, put management systems into place that identified the Level of Service (LoS) desired for schools, utilities, roads, and other public amenities, and then set up a 25-year capital improvement plan that identified how much money would be needed to pay not only for the upgrades but the ongoing maintenance. Goochland would not fall into the deferred-maintenance trap on Peterson’s watch. To the contrary, the county has accumulated large reserves.

Skeptics might say that Peterson and his allies benefited from fortunate timing. The year 2011 coincided with the nation’s recovery from the great real estate crash of 2008. Growth in fast-urbanizing Henrico County had reached the county line and was leap-frogging into Goochland. Tax revenues gushing from the economic revival made it easy to balance budgets and keep the base property tax rate at an incredibly low $0.53 per hundred dollars of assessed value. However, one might argue, if Goochland follows the same path as Virginia’s other fast-growth counties — Fairfax, Loudoun, Prince William, Stafford — it could experience the same fiscal stresses that they have.

Peterson has given considerable thought to managing growth. He says Goochland has financial systems, a zoning plan and an economic development strategy that will ensure that future development covers its own costs. In theory, he says, Goochland “should be able to grow unconstrained.”

The centerpiece of planning for growth is understanding what growth costs. Goochland has created a Capital Impacts Model, developed by the TischlerBise consulting firm, that allows the county to calculate the capital impacts of new development on public safety, schools, roads, parks, courts, convenience centers, libraries and general government.

While state law prohibits local governments from charging developers “unreasonable” cash proffers, Goochland has adopted the philosophy that developers should pay the added incremental capital costs imposed on the county. It’s a first-come, first-serve situation. If there is excess capacity in the system — say a road or water line is under-utilized — one developer might get away with paying less than the next guy in line. The key is demonstrating a tangible nexus between the proffer the county asks for and the cost imposed by the developer. The Capital Impacts Model takes away the guesswork and makes proffer requests less arbitrary.

The next strategy is concentrating growth in areas zoned for development and served by roads and utilities. Peterson rejects the scattered, hop-scotch pattern of development that has characterized so much of Virginia’s development since World War II. “We don’t want scattered pods,” he says. “We want villages.”

Moreover, the plan calls for “balanced” development — mixed residential, retail and office space rather than rigidly separated land uses — within the designated growth areas. “New development should include a desirable mixture of uses combining commercial services with residential development,” states the comprehensive plan. Villages classified as “major” might include schools, libraries, fire stations and post offices. Additionally, the goal is to give them attractive streetscapes to make them pedestrian-friendly. “Landscape and streetscape designs should serve as amenities.”

Many localities resist building apartment complexes, because the residents demand more in local services than they generate in tax revenue. But Peterson is fine with someone building an apartment complex in Goochland… as long as the developer builds retail and/or commercial nearby. Apartment residents need amenities. If the apartments are coupled with retail and/or commercial, he says, the bundled development does pay for itself.

While steering growth into designated areas, the Goochland comprehensive plan aims to protect rural landscapes. Peterson would like to see more craft breweries, barn weddings, distilleries, cideries, and farm-to-table agriculture that provide an economic underpinning to the rural economy. Prosperous landowners can afford to maintain a high quality landscape.

Thanks to West Creek, Goochland is more than a bedroom community. Major employers — Capital One, CarMax, the Performance Food Group and Virginia Farm Bureau — maintain headquarters and/or major operations there. Bolstered by the many employment opportunities nearby, a large apartment complex in West Creek was a huge success, Peterson says. It leased up immediately.

Goochland’s economic development efforts have been successful in recent years in attracting medical and independent-living facilities. Erickson Living is investing $300 million in the Avery Point senior housing facility in the eastern part of the county. Another large project is Tuckahoe Pines, which Peterson describes as a “land-based cruise ship.” It’s got everything elderly people would need from banks to hair stylists. Peterson loves old people — they pay a lot in taxes and require little in the way of locally provided services. All told, he says, he expects 55-and-older communities to comprise 20% of the county’s tax base.

Whether due to good fortune or smart planning, the Goochland Revolution is working. The county has the lowest tax burden in the metropolitan area, even while building its financial reserves and upgrading the levels of service. Remarkably, Goochland has accomplished all this while sharing with the likes of Arlington and Alexandria the highest possible Composite Index of Local Ability to Pay rating, which means paying for 80% of the cost of operating its school system.

Will success ruin Goochland like it has ruined other fast-growth counties? Will it bring more traffic congestion, create more environmental pressure, and engender greater citizen demand for services? Will the next generation of county supervisors lapse into short-term thinking and corner cutting?

Peterson remains optimistic. Low taxes, fiscal discipline, and a high quality of services is a winning formula, he says. People and businesses are moving into the county, vindicating and building political support for the Goochland model. “Every county is in a virtuous or a vicious cycle,” he says. “Goochland is in a virtuous cycle.”

This entry was posted in Budgets, Economic development, Finance (government), Land use & development and tagged James A. Bacon. Bookmark the permalink.