The Gang That Couldn’t Stick Straight 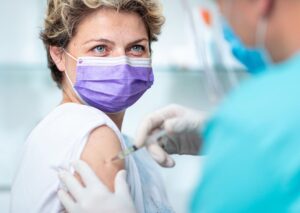 It’s an amazing thing that a year after the emergence of a world-wide pandemic, science has yielded vaccines that could strangle the life out of COVID-19 and return America and the world to more normal conditions. Most vaccines take years of work to develop, test, and approve for public consumption. That is prudent in normal times. We are not in normal times, which is why the development of vaccines to combat COVID-19 is remarkable. Who would have believed such could be the case a year ago in America, where nothing moves quickly through our bureaucratic labyrinth?

So, today we find ourselves poised to vaccinate millions of Americans from the threat of contracting COVID-19. Yet the roll-out of that effort appears to be nothing short of feckless, at least in some states like mine, Virginia, which at this writing is number 49th in the nation.

Why? Health officials in my state quickly point to constraints in supply from federal agencies which are orchestrating the distribution of the vaccine across the nation. And it appears to be the case that the initial predictions of supply availability were inflated. However, that is an insufficient excuse for what is largely a poorly conceived effort to actually administer vaccinations.

To be sure the Federal government has provided guidance on who should be at the front of the line to receive vaccinations, primarily those with significant health risks or performing essential jobs that put them at greater risk. And while it is fair to debate whether these priorities are best, that there should be a priority ranking does make sense. But even the debate of who should be in line first does not explain what appears to be an administrative Gordian knot in getting vaccine from vials into arms, particularly in a state like Virginia that has more than sufficient infrastructure to vaccinate people.

Consider this. Last week in Virginia more than 300,000 people signed up for doses of the vaccine. Only 106,000 were received. That would cause some to point to a constrained supply system, right? Wrong. Of the 943,400 doses delivered to Virginia, less than 40% have been administered. The national average, according to the CDC, is above 50%.

Taken together, it appears there is a significant throughput challenge in Virginia and other states to effectively administer vaccinations in a fashion that quickly and efficiently consumes the supply. Yet Virginia’s Department of Health —including the Vaccine Czar that the Governor has tapped to resolve the issues —appears to be preoccupied with hand-ringing over supply, latent reporting, and general confusion over what to do to resolve the problem. There’s an old saying about taking the wrong approach.

“If the only tool you have is a hammer, everything looks like a nail.”

And the tool Virginia has taken up to deliver vaccination is government bureaucracy. The first instinct was to turn to state and local health departments to administer the vaccine. Unfortunately, those agencies were caught completely flatfooted despite clear indications that vaccines were on the horizon months ago. Where was the preparation? That is a debate for another time.

In crisis management situations (and clearly COVID is one) the very first thing that must be done after a crisis is identified is to select the right course of action to resolve it. That frequently and quickly involves assessing who or what has the capacity to deliver the solution. Another aphorism comes to mind.

“If you want to hunt ducks, go where the ducks are.”

There is a reason that crisis managers turn to companies like Walmart to provide water to people in the wake of natural disasters. Capacity. They possess not only huge supplies of bottled water, but the trucking, inventory management, and communications capacity to get that commodity quickly and efficiently on the ground and in the hands of desperate people. The government doesn’t, therefore, need to invent a water supply system to fill the void of one destroyed by a raging hurricane. It has that capacity in the private sector.

Many people are eager to receive the COVID-19 vaccination. The demand is there along with the delivery solution that was under the nose of government planners months ago and in plain sight. Pharmacies.

CVS, Walgreens, and countless grocery chains have for years reliably administered flu, shingles, and pneumonia vaccinations. From the very beginning, pharmacies should have been the point of entry to administer the COVID-19 vaccination. West Virginia realized that. Next door, Virginia didn’t.

There is yet another wise saying.

“Never ask of a thing that which it is not designed to do.”

Virginia’s vaccination effort has shown we are the “gang who can’t stick straight” by relying on government to do that which pharmacies are well designed to do. Here’s another saying.

“Time to wake up and smell the coffee.”

This column is republished with permission from a newsletter distributed by Scott Lingamfelter, who served in the Virginia House of Delegates for 16 years. He is the author of “Desert Redleg: Artillery Warfare in the First Gulf War.”