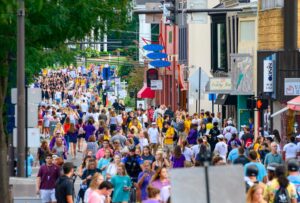 It could go either way. For many years, those of us who worked at JMU got an email every summer telling us what parking lots we could use during the dynamic freshman orientation week. I realized every time that it had been written one year and used for ten more with the dates and maybe the parking lots changed. But the editor in me wanted to know why the adjective was there. Was it to distinguish it from the static orientation week? Or did the university’s communications people just love adjectives?

The latter, almost certainly. When a former statewide official set up a sweetheart deal with the university to boost his retirement, his defense of the deal in the Richmond paper referred to the amazing student body. I took it as a clue that it was written by somebody significantly younger than him, for whom “amazing” as a synonym for “awesome” would seem normal. It was a reasonable decision; the piece wasn’t written for General Assembly members, who later passed laws to stop that kind of sinecure. It was written for the amazing and awesome 17-year-olds of Fairfax County, a cohort that is the school’s main target for most everything it does.

This is a good place to mention that there are two things to consider when looking at several months of events described in one place. One is that any presentation may make random events look like a pattern. But the other is that events easily explained in isolation begin to pile up after a while.

That said, I’ve often described the JMU student body as “the slim, blond, spoiled daughters of Northern Virginia.” It’s an unfair characterization, unless you take it to mean healthy and fit, white, privileged, 60% female, and coming to Harrisonburg from Virginia’s large suburban counties and Tidewater cities that might as well be large suburban counties. One of those descriptions has seven words. One has 26. One requires you to understand more about Virginia than most Virginians do. One is overly flippant, one could argue. Both describe, with qualifications, the JMU Franchise — the cohort the school can’t survive without. The school needs more kids from New Jersey paying out-of-state tuition, and it needs enough non-white students to at least look diverse.

If one wanted to be flippant about JMU’s administrative and communications mission, it’s to present the school well to the Franchise, and to keep it out of the news except for sports. It’s that administrative attitude — a fragile dandelion between truth and fabrication, between reality and idea, that could disintegrate if the wind blows it either way — that led to the school’s spectacular failure at handling the coronavirus response in summer and fall of 2020.

It’s an old family story, and maybe everybody has the same one. It’s like the Cherokee princess in every Southern family tree, or the guy who knew a guy who escaped occupied France in a cheese cart. It’s a good story until you find out several people have exactly the same one.

So maybe the rat was one of those, but certainly we have one in our family. The story, I mean, not the rat.

My grandparents on my dad’s side were farmers in Depression-era Iowa. Grandpa Joe Fitz was also a local lawman of some sort and made and/or sold moonshine, but so many of these stories come down as asides. The stories weren’t “Once upon a time there was a man who made moonshine.” More along the lines of “a toy truck that I had like that about the time your grandfather was selling moonshine.”

My dad was the youngest of eight kids, and seven of them would have still been at home. So, nine mouths to feed, a certainty, and however much a gallon of cream sold for, another hard, fast number. And on the other side, a dirty, filthy, dead, possibly disease-ridden rat. But the disease-ridden part was only a possibility, not a certainty.

College students are the cream of Harrisonburg’s economy and tax base. They spend money and pay taxes and don’t cost a lot in services. And there are 21,000 of the little hooligans. Actually, 20,985 lawless hooligans and 15 I really like. They know who they are.

The rat in the cream was COVID when I first wrote this in early July 2020. More than a third of the JMU’s students would return over the next six weeks from the sections of Virginia hit hardest by COVID. All of them were in the age demographic with the strongest growth in cases that summer.

I don’t know if my grandparents poured out the cream or threw out the rat and sold the cream. All I remember of the story is they had to decide. The story reminds me of an exchange with my mom when I was in junior high and my dad was working for Allied Chemical in Hopewell. It was summer and there was an inversion layer and, like other folks with underlying health conditions, my mom was extremely uncomfortable.

“Will they close any of the plants?” I asked.

“You better hope not,” she said.

In Harrisonburg and Rockingham County in summer 2020, new cases were down. Our numbers, scary in April and May, were better than a lot of places in Virginia, especially the places many JMU students would return from.

If they didn’t return, if JMU opened on-line in the fall, life could continue getting back to normal. K-12 schools could open in a less limited way, and the economy could continue to reopen. But suppose they reopened an economy and nobody came.

Maybe the precautions on campus would work and it wouldn’t spread. Maybe none of them would come back sick or infected. Maybe the rat would be clean. But maybe local cases would take off in a way that would widen town-gown divisions for a generation. It’s a business decision versus a health decision, but it’s not that simple. Nothing in 2020 was.

One thing that was fairly certain that summer was that Gov. Ralph Northam was the only one who might decide JMU wouldn’t reopen normally. No one at the school would make that decision. It’s not that kind of place. The school reopened in part because that’s what it had always done. I was among those who’d predicted in early March that JMU students wouldn’t return from Spring Break if the University of Virginia. and Virginia Tech didn’t. UVa and Tech decided first, and JMU followed. But in that and other decisions, it was never clear if JMU was waiting to see what the other schools would do or if the leadership was just indecisive.