The Fall of the Regional Press in Virginia – Virginian-Pilot Edition 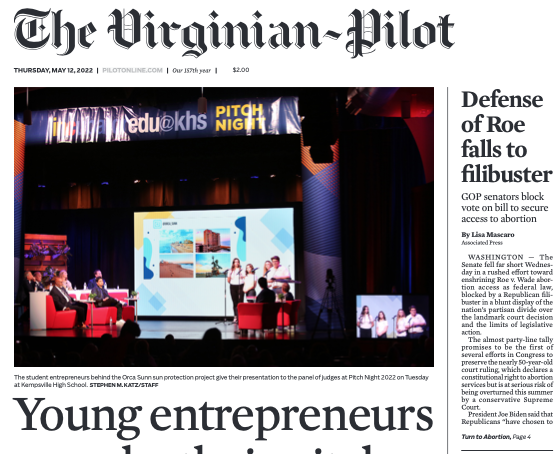 One of my morning newspapers is The Virginian-Pilot.   It used to be an outstanding regional newspaper. Shrunken to a sliver of its former self, it is no longer.

Small size need not compromise integrity, but it has in this case.

The Pilot unapologetically accepts, apparently without review, wire service reports on national news based entirely on the alignment of the stories with the political narrative the Pilot supports.   With no concern for accuracy.

Readers look in vain for stories unhelpful to the left.

A front page story by Lisa Mascaro of the Associated Press was headlined today:

Regardless of one’s personal view on the subject of abortion, the headline and the story below it were false.

There was no filibuster.  The Senate bill submitted by Sen. Blumenthal failed 49-51 in an up-down vote on the bill yesterday. Sen. Manchin, D-West Virginia was the deciding vote.  Oxford Dictionary definition of filibuster:

…an action such as a prolonged speech that obstructs progress in a legislative assembly while not technically contravening the required procedures.

There was no obstruction of progress when a majority voted against a bill, as happened here.  The majority on any particular vote is not like the Senate filibuster, which requires 60 votes to proceed.  But a filibuster was not required on this bill.

The majority leader knew it would fail to gain a majority when he put it to a vote.

The bill voted on did not “defend Roe”.  The Blumenthal bill expands Roe/Casey to proscribe any state limits on abortion and specifically supersedes the application to abortion rights of the federal Religious Freedom Restoration Act of 1993.

Defending Roe/Casey?  Manchin opposed the proposed bill.  He considered it too broad because it went far beyond Roe/Casey.

Two Republican senators have proposed a bill that he supports.  The alternative bill is written specifically to codify the essential holdings of Roe and Casey and their application in subsequent federal court decisions.

The rest of the Democrats in the Senate do not believe Roe/Casey went far enough.  They are welcome to that opinion and to vote that way.  There is no reason not to write that.  Senate Democrats themselves would proudly agree.

The details.  This is not just a headline writer error.  It is an organized effort to mislead.  The first sentence of the Pilot/Associated Press story:

The Senate fell far short Wednesday in a rushed effort toward enshrining Roe v. Wade abortion access as federal law, blocked by a Republican filibuster in a blunt display of the nation’s partisan divide over the landmark court decision and the limits of legislative action.

Also untrue.  Again, there was no filibuster.

Second, the federal bill offered in the Senate yesterday, the Blumenthal bill, quite specifically and at great length (13 pages) blocks state laws on abortion.  Roe/Casey very demonstrably did not do that, well before a final decision on the case currently under review by the Supreme Court.

Unlike the Blumenthal bill but affirming Roe/Casey, the bill sponsored by Senators Collins and Murkowski does not proscribe state laws.  One summary of Roe/Casey:

In Casey, the court upheld Roe’s holding that a woman has the right to choose to terminate a pregnancy up to the point of fetal viability and that states could restrict abortion after that point, subject to exceptions to protect the life or health of the pregnant woman. But the Casey court concluded that Roe too severely limited state regulation prior to fetal viability and held that states could impose restrictions on abortion throughout pregnancy to protect potential life as well as to protect maternal health – including during the first trimester.

The Collins/Murkowski bill, mentioned but not defined in paragraph 21 of the AP story, captures Roe/Casey in a nutshell:

Telling the truth about both Senate bills would have been easy and would not have disturbed the debate, just informed it.  There are lots of people who will oppose both bills.  But everyone is entitled to know what is in them.

For an example on informing the debate, see above.  It includes links to both bills if readers wish a side-by-side comparison.

So to readers who can hold two thoughts – one on their views on either side of the abortion debate and the other on Americans’ need for accurate reporting to inform our opinions – the Pilot-Associated Press story is a front page lie.

Each should print corrections in the same space where the story was run.

But they won’t.  Not when truth doesn’t fit the narrative.