The Epic Fail of Loudoun Schools 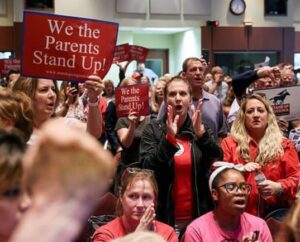 Could there be a link between the two? I will argue that there is: that the obsession with “social justice” issues has distracted Loudoun school leadership from its primary job of, you know, actually teaching children.

By way of background, Loudoun has the highest median household income ($134,000) in the United States. Its citizens are the 6th best educated in the U.S., as measured by the percentage of adults with a B.A. education level (58.7%). The Loudoun County school budget is about $1.2 billion, or $13,700 per student compared to the state average of $11,600. By traditional metrics of per-pupil spending and socioeconomic status, Loudoun students should be stellar achievers.

Many school systems use Measures of Academic Progress assessments (or MAPs) to track the progress students in grades 2 through 8 are making. According to Loudoun Now, Ashley Ellis, assistant superintendent of instruction said that MAPs data “shows that COVID-19 and hybrid and distance learning led to a decrease in proficiency, and highlights particularly low growth for English learners and students with IEPs (Individualized Education Programs).”

“We are able to project a student’s path from fourth grade, to see whether they’re on a trajectory to be college-career ready by 11th grade,” Ryan Tyler, director of research, assessment and school improvement, told the School Board in August.

Typically, Loudoun students rank in the 50th-60th percentiles in growth relative to students across the country in math. But data from the 2020-21 MAP testing shows that no category of test takers (broken down by race, ethnicity, English learners, etc.) scored higher than the 45th percentile.

Let that sink in. Nearly 60% of Loudoun adults have a B.A. degree. Only 45% of the students covered by the MAPs math assessment were tracking with the national average for measures of student growth.

One must ask why this might be. Even without the benefit of the latest MAPs data, Jim Sherlock has been asking that very question. I urge you to read his columns on the subject. Meanwhile, I hope here to expand upon his analysis.

My argument is that the School Board has taken its eye off the ball. Clearly, the COVID-19 epidemic has something to do with the abysmal failings of the school system. But every school system in the country dealt with the same COVID challenge. Instead of figuring out how to keep the schools open for in-person learning, as most private schools and many public schools did, the Loudoun school board was intent upon carrying out a social revolution, implementing a social-justice agenda in the areas of race and transgenderism.

Thus, we get stories like the one encapsulated in the Washington Times headline above in which three Loudoun County school teachers are heading to state court to halt the school system’s new mandatory policy on the use of pronouns. Yes, while Loudoun schools were engaged in an epic fail in their core mission of teaching students reading, writing, math, and science, the school leadership was focused on ensuring that transgender students, a tiny minority of the school population, were called by their preferred pronouns.

Of course, that’s just one headline. There have been hundreds of others. The School Board has taken on the task of bringing about racial “equity” — equal group outcomes. Ironically, but predictably, even as learning progress has suffered for all, the gaps between racial/ethnic groups has gotten wider. It seems that parents in the wealthiest and 6th most highly educated county in the country have a perverse desire to see their children acquire the skills they need to get into college, and those with resources are willing to devote time and money to ensuring that their children get what their schools aren’t giving them.

If you query Bing (I often use Bing rather than Google) for “Loudoun County tutors” you will find results for Loudoun Tutors, Mathnasium, the Kumon Math and Reading Center of Landsdowne, tutors specializing in the ACT college-admissions exams, online tutoring, in-person tutoring, homeschool tutoring, and a wide array of private tutors.

You see, when public schools fail to do their job, affluent families have options that poor families don’t. Well-to-do parents can send their children to private school. They can homeschool. They can hire tutors.

Failing public schools make inequality worse. The fixation on turning public schools into engines of social justice actually aggravates the very inequalities that “progressives” seek to redress. The best social-justice program in the country is a public school system that works. Schools should focus on teaching, not transforming society.