The Dude Had It Coming! 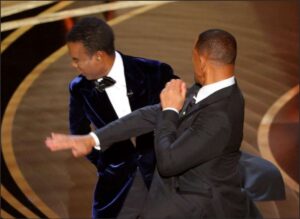 Most people watching the Academy Awards ceremony were shocked to see movie star Will Smith stride unbidden onto the stage and slap master of ceremonies Chris Rock across the face. Smith later apologized for his action, and then resigned from the Academy. Condemnation was widespread. But the disapproval was not unanimous.

Fletcher Norwood teaches high-school honors classes at a Title I school in Virginia, and he recalls how social media lit up the cell phones of the kids in his classroom the day after the awards ceremony.

“Of course, Smith slapped him. Rock dissed his wife. That’s how you’d react to a situation like that,” says Norwood, summarizing the prevailing viewpoint. To his students, there was nothing remarkable about the incident. “If you’re going to say something like that, you should expect to get hit.”

After a decade of teaching lower-income kids in Title I schools, Norwood was not surprised by his students’ attitude. Most come from broken families in low-income neighborhoods mired in a culture of poverty and violence. Attitudes and expectations are radically different from those of the middle- and professional-class educators, politicians, journalists, and activists who have been driving educational policy in Virginia. The political class is, in a word, clueless about what’s happening in schools. The theories of bureaucrats in Richmond and district offices are unmoored from reality. Adult authority at his school is disintegrating, disorder is rampant, and the quality of education, which was never great to begin with, is tragic.

Fletcher Norwood is not the teacher’s real name. He asks to stay anonymous, not for fear of losing his job — his high school is so short-staffed that his superiors can’t replace him — but because they do have the power to make his life miserable in a thousand small ways. He’s already burned out and disgusted with the system. He doesn’t need any more aggravation.

Fights at Norwood’s school are a frequent occurrence — there’s at least a rumble every other day. Just as Smith’s slap across Rock’s face was televised for the world to see, students regard fights in the hallway or out by the bus stop as a form of entertainment. Crowds gather, root for one or another of the antagonists, and film the fisticuffs with their cell phones for posting on social media. No one tries to break up a fight, says Norwood. Students view it as a spectator sport.

“It’s the most entertainment they’ll get for the day,” he says. “Think about it. If you’re not interested in the education you’re getting, what’s the most interesting thing you can do at school?”

Teachers rarely intervene either, he says. Breaking up a fight is a no-win proposition. First, there’s the risk of getting assaulted. Second, there’s the risk of getting captured on cell phones, with edited clips posted to TikTok. If a kid gets hurt in the fracas, says Norwood, the teacher is toast. If the teacher comes across as looking like a bully, he’s toast. Administrators tell teachers to break up fights, but no one has the necessary training. Besides, teachers believe that if controversy arises, administrators won’t back up them up. “There is zero incentive to get into the middle of a fight,” he says.

Adults exercise little authority at Norwood’s school. Students routinely use profanity in class, and it’s not unusual for them to say, “Fuck you” to his face. Telling them to speak politely is a hopeless task. Profanity is so ingrained in their speech patterns that depriving them of swear words would render them almost mute. More to the point, there are no repercussions for being disrespectful.

Teachers can’t lay their hands on kids. Students can’t be suspended unless they commit a major offense such as bringing a gun to school or selling drugs on the grounds. The idea of sending students to the principal’s office is laughable — there’s no sanction to bring against them if they refuse to go. Administrators distinguish between “major” offenses and “minor” offenses. When teachers write up the minor offenses, they go into a file never to be seen again — unless the kid commits a major offense, in which case the paperwork might be dusted off in support of a rare disciplinary action.

Many fights erupt over conflicts originating in social media. At Norwood’s school, students bring their cell phones into class and refer to them continuously. Many wear ear plugs and listen to music during class. Discipline has collapsed to the point that taking away the cell phones would precipitate a riot, he says. There is no point in writing up students. Nearly the entire student body would have to be disciplined. Under pressure to report fewer disciplinary actions, administrators aren’t about to do that, Norwood says. Knowing the students will suffer no consequences, teachers don’t even bother trying.

While the district has dispensed with traditional disciplinary measures that supposedly created a “school to prison pipeline” — suspending students, arresting kids for criminal acts — it has failed to implement an effective substitute. In theory, teachers are supposed to embrace a therapeutic approach: explaining to malefactors how their negative actions hurt others, working to develop their emotional maturity, helping them deal with past traumas, coaching them how to work out their differences in reconciliation sessions, and getting parents involved. It’s all a joke, says Norwood. Teachers never got the training on how to be social counselors. And training wouldn’t do any good anyway — not at his school.

Counseling and therapy might work in schools where students are raised to have some respect for adult authority. Such respect doesn’t exist at his school. Many kids express defiance toward adults, typically with outpourings of profanity. They have no respect at all for the rights of others, feeling free, for instance, to barge into his classroom and interrupt, for example, to ask a fellow student if he has a cell-phone charger. Taking up a problem with the parents, as called for in the new disciplinary protocol, is a joke. If they care at all, parents are likely to take the side of their kids.

The kinder, gentler approach to discipline has broken down.

In his so-called honors class, says Norwood, he estimates that maybe half the kids put forth any effort to learn anything. He reaches a few with whom he manages to establish a personal connection. The rest are marking time, knowing they will be socially promoted if they show the slightest sign of having learned anything, thus demonstrating “progress.”

It’s bad enough that so many students are learning so little academically, Norwood says. But in the absence of meaningful adult supervision, they’re not learning emotional control either. That will not serve them well in the adult world. For many, verbal and physical confrontation is the go-to mode, and that will get them in trouble with others… who have learned no emotional control. He personally knows of three young men who have been killed outside the school in the past couple of years.

Norwood is profoundly pessimistic that anything will change. Administrators in the central office are disconnected from reality. He doesn’t see them ever acknowledging that their theories have created a human catastrophe. “Mea culpa are words they don’t know,” he says. Their top concern is covering their asses and protecting their careers. “They’ll never admit they were wrong.”

Nothing will change. And countless lives will be ruined.

This entry was posted in Discipline and disorder, Education (K-12), Uncategorized and tagged James A. Bacon. Bookmark the permalink.