Each of the four tax increases I discussed in this guest column for the Richmond Times-Dispatch today has a strong constituency behind it, and logical arguments in its favor.  Only one is in effect now (the hospital provider taxes), and the other three are merely pending.

Only one of them, amendments to the sales and use tax to apply it to remote sellers, will require specific legislation for that purpose.  The conformity tax hike happens if the 2019 General Assembly fails to stop it, the carbon tax is being imposed by regulation after legislation to stop it was vetoed, and the Medicaid taxes imposed on hospitals are authorized in vague language buried in the state budget with no separate roll call vote.

Would all four really be happening if each required a direct roll call vote in the General Assembly?  A fair question.

This started as a line in a presentation I made October 29 for the Thomas Jefferson Institute for Public Policy, when I mentioned that the state tax increase that results from conformity – if allowed to happen – would be one of three.  At the time I had forgotten the carbon tax at the heart of the Regional Greenhouse Gas Initiative (RGGI), but then a story about it reminded me.  Make that four.

The General Assembly, the Northam Administration, the business community and the voters need to at least focus a bit on the overall picture and own what is happening.  My quite transparent goal is to prevent the big hit, the tax hit to individuals and businesses coming from conformity to the federal taxes.  Conformity is instead an opportunity to make some positive tax reforms.

The newspaper posted the column online yesterday afternoon, and I quickly received an email from a friend inside the administration pushing back on the assertion that the Medicaid provider taxes on hospitals will eventually find their way to patients.  The argument is that the money will replace dollars being imposed on paying patients for uncompensated care, which is certainly how those patients have been paid for to date.

But there is no guarantee in the state budget language that hospitals will now reduce their charges to the rest of us, and the Medicaid expansion goes way beyond paying for those people who were already receiving care.  Hundreds of thousands of people who had been avoiding seeking care at all now have a way to pay, and that was the whole idea in the first place.   Even as I accepted that Virginia should do this (with some reasonable controls which are now in jeopardy), I never doubted it would be expensive.

On Friday it was revealed that the cost will be higher than the General Assembly had been told, even as the first enrollees are still filling out their paperwork, and those Medicaid provider taxes will grow.

The other thing about these four taxes is they are all easy to miss.  Hospital accounting is notoriously byzantine.  Dominion Energy Virginia’s payments for RGGI allocations will be part of your bills (although I hope at least in a separate line).  Few notice now whether sales tax has been added to an online purchase.  This conformity thing has people terribly confused.   The accounting is complicated and the accountability lacking, but all four represent major costs to Virginia’s families and businesses. 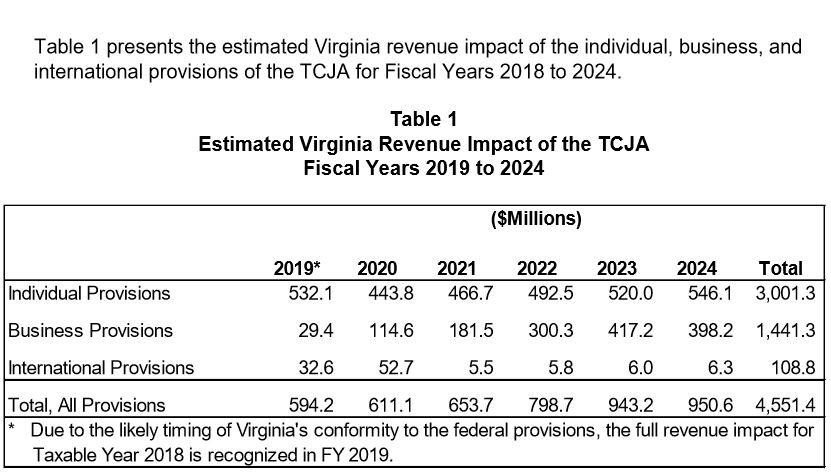 The Northam Administration released these estimates of the conformity tax increase in August. They assume full conformity with TCJA with no compensating state policy changes to rates or deductions.

This entry was posted in General Assembly, Taxes and tagged Stephen D. Haner. Bookmark the permalink.