Taking Food From Needy Children to Advance the Trans Agenda 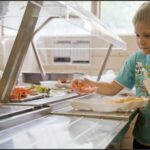 This ought to be the number one campaign issue in the U.S. right now: the Biden administration’s radical plan to starve the National School Lunch program unless states adopt far-left gender identity rules for schools that include allowing biological boys to compete in girls’ sports.

And it’s just another case of a federal agency — this time the USDA — exceeding its authority. How many times will Biden’s out-of-control bureaucrats have to be smacked down by the U.S. Supreme Court before they stop illegally exercising powers not delegated to them by Congress?

The attorneys general asked a federal court in Tennessee to prevent the USDA from withholding food assistance from schools “that continue to separate students by biological sex in appropriate circumstances,” including sports, locker rooms, showers and restrooms.

“But they’ve reached a new level of shamelessness with this ploy of holding up food assistance for low-income kids unless schools do the Left’s bidding,” Mr. Rokita said.

Since this story appeared in The Washington Times last month, Virginia Attorney General Jason Miyares joined the action, bringing the number of states that are suing the feds to 23.

If they are unsuccessful, states will have to decide if they want to scrap the free lunch and breakfast programs in schools, or relent and simply watch all of the advances of Title IX and girls’ sports erode.

Once again, only the courts can save us from the madness of our current president and the lefties that control his agenda.

This heavy-handed move by the USDA was engineered by unelected, power-drunk bureaucrats.

According to an op-ed he wrote in The Virginian-Pilot, where he responded to what he alleged had been an editorial riddled with errors, Miyares said that “hundreds of thousands of Virginia families” receive nutritional assistance a year totaling about $1 billion in federal money.

A chunk of that goes to the 122.5 million school lunches and 35 million breakfasts served to underprivileged Virginia children each year.

Look, kids who are hungry cannot learn. The lunch and breakfast programs are examples of worthy government programs that actually work, providing a desperately needed service with little waste and fraud.

So, it is unspeakably heartless for Biden and his henchmen to use needy children as pawns in their unpopular gender identity gambit.

Every Republican running for office in the mid-terms should campaign on this important issue.