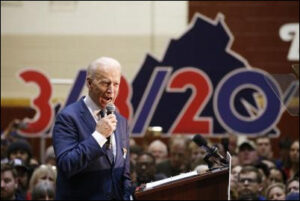 Joe Biden prevailed in the Virginia Democratic primary Tuesday, showing that the state’s movement to the political left can go only so far.

The former vice president got 53% of the vote with Sen. Bernie Sanders snaring 23%,and Elizabeth Warren and Mike Bloomberg far behind. Nationally, Biden’s remarkable comeback on Super Tuesday has made him the leading Democrat, although Sanders isn’t gone yet. Here are some takeaways:

My personal take is that Biden is less than ideal but he’d be a lot better than the current president. I was open to Bernie until I read a WaPo story last year about how he spent his honeymoon in the Soviet Union in 1988 when he was the socialist mayor of Burlington VT.

Sanders came back from his trip praising the Communist government for its strides in health care and housing, noting that the U.S. had had too many incursions into other countries.

That view struck me as terribly naïve. In 1988, I had been working as a correspondent in Moscow for two years. I actually knew a lot of ordinary Russians and had been to their apartments and, a couple times, had made hospital visits. That gave me a realistic insight into the actual lives people led.

I had among my circle of friends a few guys who had fought in Afghanistan and they despised the war not knowing why they were there. The place was so dysfunctional that on “Paratroopers Day,” former airborne troops with Afghanistan experience who would get dressed in cammies with their sky blue berets. They’d get roaring drunk and go into open food markets beat up (or kill) dark skinned Chechens or Georgians selling fresh food..

The cops did next to nothing but they were a big presence for me. It was still the Cold War and I had to deal with the KGB. I needed permission to go anywhere 40 kilometers from the center of Moscow. I’d get it but I still would get pulled over regularly by police to check my documents.

That was the Soviet Union I knew.

This entry was posted in Elections and tagged Peter Galuszka. Bookmark the permalink.