Have we gotten to the point where mobs of anarchists can rampage through Richmond as they did last weekend, setting fires and assaulting police officers and firefighters while the governor, the attorney general and others basically shrug?

I can answer that: Yes. That’s exactly where we are.

In a blistering editorial,“Where Is The Leadership?”The Richmond Times-Dispatch demanded to know how much longer these insurrections would be tolerated.

“Let us be clear: Saturday night’s violence was a planned riot,” they began.

The editors are correct. Have a look at the flier on social media asking people to meet at 9:30 p.m. Saturday to “eff” things up: 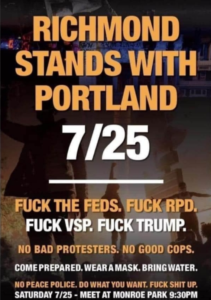 As planned, by 11 p.m. Saturday these criminals were laying siege to the Richmond police department. Fires were set, windows smashed, a city truck was torched and police officers were pelted with fireworks, chunks of pavement, water bottles and other projectiles.

In all, at least 17 people were arrested.

The Times-Dispatch voiced exasperation with the silence from state officials after the melee.

Here’s what we do know: The absence of leadership at all levels of government has compounded these circumstances. We’ve normalized too many behaviors that make Richmond — and the United States — a less safe and prosperous place to live, wrote the RTD editors.

Individuals are desecrating property and being absolved of any wrongdoing. Banks and businesses are boarded up and, locally, a critical public economic engine — VCU — incurred $100,000 in damage to its Monroe Park campus in a matter of hours…

The public still is looking to (the mayor) the Richmond City Council, Gov. Ralph Northam, the Virginia General Assembly and the White House for a way forward. And the solution won’t be found in a press conference, a tweet or staying silent. We all have eyes and see what’s going on in our city’s — and nation’s — backyard.

When does this stop? What is the end game to these protests? The violence seems to escalate daily, not just in Virginia’s capital city but across the country.

The demonstrations that sprang up in the aftermath of the George Floyd murder were spontaneous protests over an egregious act.

It’s imperative that investigators use all the tools available to find out who or what is behind these planned insurrections. Shoot, use the federal RICO statutes if necessary.

And what does the General Assembly plan to do when it meets next month in Richmond to curb the lawlessness? As a part of a package of police reform measures, the Democrats propose reducing the charge of assaulting a police officer from a felony to a misdemeanor.