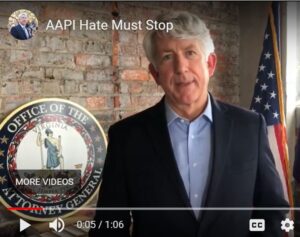 Mark Herring: “The rise in violence and hate against Asian-Americans has to stop.”

Asian Americans living in Virginia have been able to rest easier since March knowing that Virginia’s Attorney General Mark Herring has entered the the battle against anti-Asian hate crimes. Not only did he set up a website, NoHateVa, in which he proclaimed, “The rise in violence and hate against Asian Americans has to stop,” he even led a discussion with attorneys general from other states on how to halt the epidemic.

Asian Americans might derive even more comfort from the fact that the Stop-Asian-Hate meme is a figment of Herring’s fevered imagination.

The Crime in Virginia 2020 report, published by the Virginia State Police, indicates that Virginians of Asian ancestry are far less likely to be crime victims than Whites or Blacks. Only six Asians were victims of hate crimes based on their race last year in Virginia — out of a population of roughly 440,000. I suppose Herring could claim that that represents a 20% increase!!!! from 2019, when there were only five such victims, but when the odds of being the victim of a hate crime are one out of 70,000, an increase of one additional incident won’t keep many Asians hiding in their basements. (Five other Asians were victims of hate crimes, but not because of their race.)

Oh, by the way, only a tiny fraction of all hate crimes involved physical injury. Of the 190 hate crimes reported in 2020, 88 involved vandalism, 60 simple assault (physical attacks that fail to cause bodily harm), and 36 intimidation. Only 10 incidents involved aggravated assault. (The Crime in Virginia 2020 report doesn’t break down those categories by race.)

The fact is that Asian Americans are far less likely than any other racial group to be crime victims. That’s largely because most violent crime is intra-racial, occurring between people who know one another, and Asians suffer from far less social pathology and criminality than either Whites or Blacks. Only one Asian was murdered in 2020 compared to 173 Whites and 350 Blacks.

I would conjecture that Asians, based on their lived experience, are far more likely to be aware of these realities than a super-woke White politician like Herring who lives in a media bubble in which memes like #StopAsianHate never encounter contradiction. Most Asians likely see him as the insufferable virtue signaler that he is.

Indeed, I would wager that most Asians in Virginia are far more concerned about the widespread sentiment that there are “too many” Asians in the state’s elite public schools and the discrimination against Asian Americans in higher-ed admissions… you know, the kind of policies that Herring supports indirectly by promoting preferential “racial justice” initiatives for other minorities. There may be anti-Asian hate, but it’s not coming from White Supremacists, and it’s not reflected in hate crime statistics.

This entry was posted in Crime , corrections and law enforcement, Race and race relations, Uncategorized and tagged James A. Bacon. Bookmark the permalink.