Stoney Off the Hook for Statue-Removal Contract 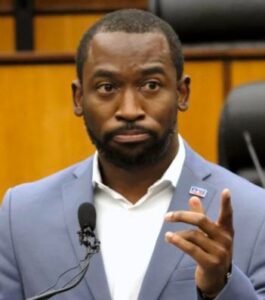 A special prosecutor has closed his investigation into Richmond Mayor Levar Stoney’s awarding of a $1.8 million statue-removal contract to NAH, LLC, set up by a former campaign contributor. Timothy Martin, Augusta County’s Commonwealth Attorney who was assigned to the case when Richmond’s chief prosecutor recused herself because of a conflict of interest, said he will not seek charges against Stoney. Authorities found no evidence of public corruption. “It’s over,” Martin said, according to the Richmond Times-Dispatch.

“This is exactly what we said in July 2020; that there was no evidence of anything. The mayor had nothing do with the choice of this contractor,” said Stoney’s attorney Jeff Breit.

However, Martin said it is “still debatable” (the RTD’s words) whether the administration violated emergency procurement rules or the state’s law on war memorials. He would not consider charges based on those allegations because the scope of his investigation was focused on public corruption. Pursuing charges on the technicalities of procurement policy, he said, would be a “misuse of resources.”

“The tenor of last summer’s protests and the vulgar vandalism of the monuments saddened me,” said Martin, a former Richmond prosecutor and a Republican. “My decision may be unpopular among many, but it is based on our best effort to investigate this matter, and my sincerest desire to exercise my discretion appropriately.”

Bacon’s Rebellion broke the story last year, revealing that the highly profitable contract went to Devon Henry, a previous campaign donor who set up the NAH shell company in such a way as to avoid revealing his name. Henry later said the secrecy was motivated by a concern for his personal safety after death threats had been issued against a contractor removing a statue in New Orleans.

Martin’s investigation confirmed Stoney’s account that he could find no other contractor willing to take down the Confederate statues. According to Martin, Stoney did not recommend Henry for the job. Another city employee — whom Martin declined to identify — had made the suggestion.

Martin did concede that the lack of competition for the contract likely drove up the price. “Certainly the $1.8 million included a substantial profit to the contract,” he said. “Taking a profit … in a transaction with a government entity is not, however, criminal.”

This entry was posted in Scandals and tagged James A. Bacon. Bookmark the permalink.