Stewart Gets Last-Minute Gift From Trump 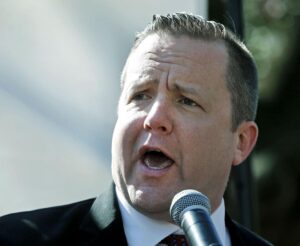 Corey A. Stewart, a conservative firebrand from Prince William County, is getting a last-minute going-away present from President Donald Trump.

As Trump’s administration comes to an end, Trump has created a position on trade at the U.S. Commerce Department that is just for him. In 2016, Stewart headed Trump’s Virginia election campaign before being fired. Stewart said that he was Trump before Trump was Trump.

Stewart is an international trade lawyer and is expected to strong arm Trump’s tough and confusing trade policies.

A special target is China, which Trump has castigated, with some justification, for cheating on business deals, fiddling with its currency exchange rates, growing its armed forces and trampling on human rights.

Stewart will toughen enforcement of Trump’s hostile trade relations, according to news reports.

Some trade experts wonder what the Stewart story is all about. According to Reuters, William Reinsch, a former Commerce undersecretary, said he viewed hiring as “peculiar” since he is filling a position that does not exist.

One obvious possibility is that Trump is rewarding Stewart for his loyalty. Stewart works as an international trade lawyer and his practice is likely to get a boost from his brief time with Trump who is expected to leave office Jan. 20 after clearly losing reelection this month.

Stewart first achieved political infamy a little more than 10 years ago when he pushed hardline and xenophobic policies against Hispanic immigrants. The former head of the Prince William County Board of Supervisors drew national attention for using visa enforcement issues to drive brown-skinned foreigners away.

Many Hispanics went to Prince William County to help with a home construction boom driven by cheap mortgages and lax scrutiny of borrowers. When the 2008-2009 recession came, the building boom collapsed. The Hispanics learned they were suddenly no longer welcome.

Stewart ran for the U.S. Senate but was trounced by Tim Kaine in 2018. During the race, he was quoted as saying, “I’m going to be the president’s number-one partner in the Senate.  I’m willing to be the bruiser – twisting arms, knocking heads and ridiculing other senators in order to pressure them to getting the president’s agenda through … To do whatever it takes.”

He also appeared with hard-right groups at the white supremacist rally that led to three deaths in Charlottesville in August 2017. A Minnesota native, Stewart also curiously resists removing Confederate memorials.

Although his time at Commerce will be short, there are serious questions about whether another bruiser is needed regarding China. Some officials there had advocated a balanced approach since the American and Chinese economies have become tightly linked. For example, most of the cell phones used in the U.S. are made in China.

The Chinese have long been known as tough traders but matters got much hotter when Xi Jinping came to head the Communist Party. The Chinese created concentration camps for about one million ethnic Uighurs in a western province.

In recent years, China has been much more aggressive at sea. It has claimed dominance over a number of islands off the coasts of Vietnam and the Philippines. As part of that strategy, Chinas has been building up its navy and other armed forces. This includes developing super-fast missiles that could seriously damage or sink American aircraft carriers that are the basis of U.S. defense in the area.

China has also cracked down on U.S. journalists and others reporting from the country by denying them visas and work permits. It demanded more control over Hong Kong and erected massive surveillance programs against its citizens.

Technology has become an issue as China has been accused of putting listening or tracking devices in the electronic gear or services it sells in the U.S. These could include cell phones, passenger cars it was trying to sell to the Washington Metro system and other products and services offered by Huawei, Zoom and TikTok.

William J. Holstein, a good friend of mine from my BusinessWeek days and a China expert, has written: “It seems we are headed down the slippery slope of technology dis-engagement between the United States and China. If you add up the trends it seems both governments are organizing themselves to prevent each other’s companies from sharing too much technology or too much investment.” (See WilliamJHolstein.com)

Bill is the author of several books including ones on the Japanese and American economies. His most recent is “The New Art of War: China’s Deep Strategy Inside the United States” (Brick Tower Press) that was published last year.

The book explores how China has a carefully coordinated policy of sending its people, notably students, to the U.S. to make contacts and become essentially spies who take their intimate knowledge of future American technology prospects back home. Such practices could be part of the animosity about Asians that seem to be on the rise.

Against this backdrop, as the Trump administration advanced, Commerce’s “even keel” advocates have been replaced by hard liners on China. Stewart is the latest example.

Bill Holstein thinks the Biden Administration will continue some of Trump’s policies. There needs to be a balance since Beijing and Washington are tightly interlinked. Being too aggressive could push China into military conflict.

One wonders why hard line tough guys like Stewart are needed during the next two months. What you need are smart diplomats.