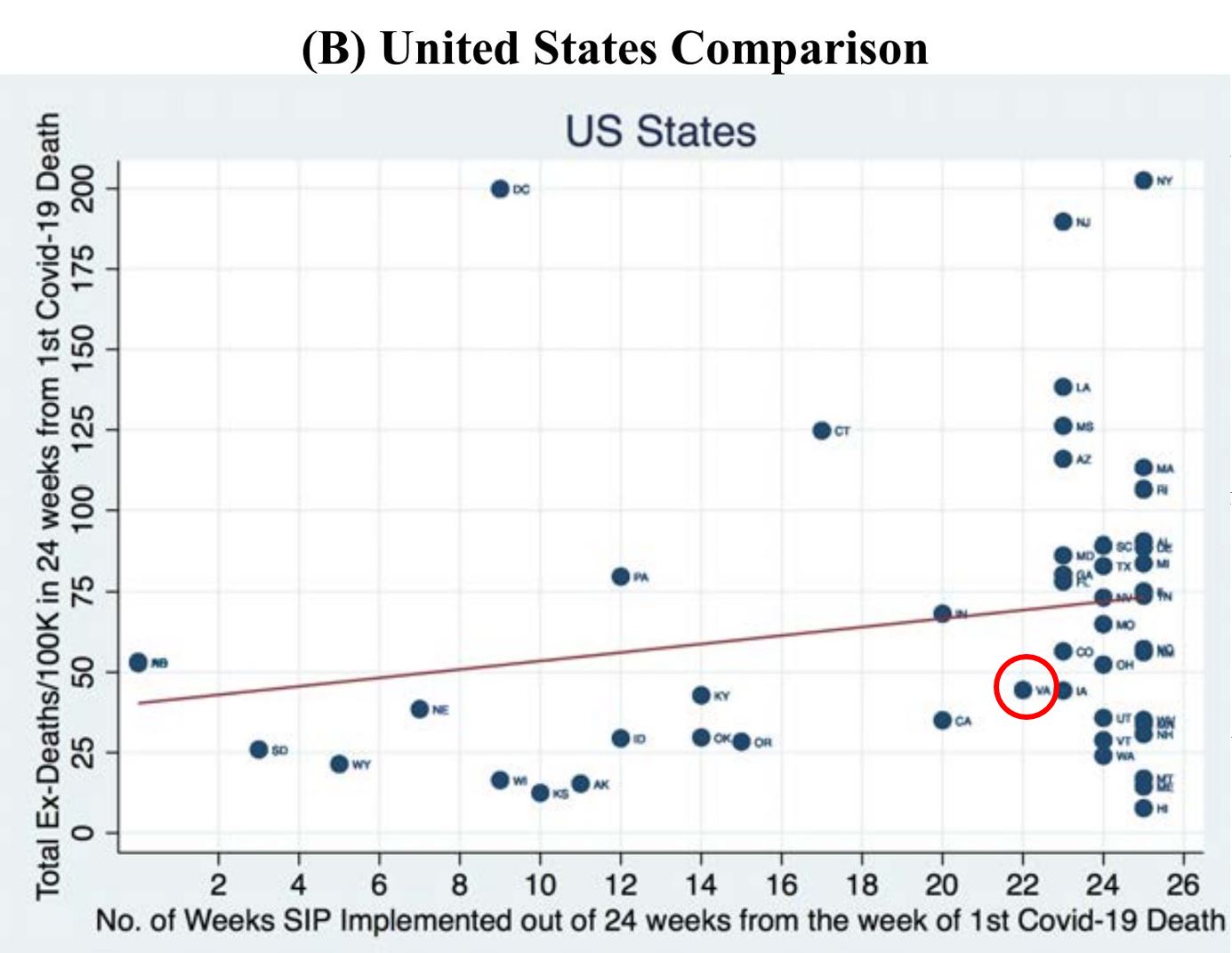 This graph shows a correlation between the number of weeks that Stay-in-Place measures were implemented in a state (horizontal axis) and the number of excess deaths (vertical axis). Overall, more SIP equals more deaths, although the correlation is weak and there are plenty of exceptions, including Virginia (highlighted in red.)

A new study comparing “excess deaths” across 44 countries and the 50 U.S. states finds that Stay In Place (SIP) policies enacted to control the COVID-19 epidemic were counterproductive. Overall, the added number of lives lost to non-COVID more than offset the number of lives saved from slowing the spread of the virus.

What’s more, the Stay In Place policies enacted in the U.S. had the most negative impact on African Americans.

“We fail to find that SIP policies saved lives. To the contrary, we find a positive association between SIP policies and excess deaths,” write Virat Agrawal with the University of Southern California and three co-authors in “The Impact of the COVID-19 Pandemic and Policy Responses On Excess Mortality.”

The authors articulate two broad findings. First, the impact of Stay in Place policies were less than commonly imagined because the people at greatest risk would have voluntarily limited their activity anyway. And second, Stay In Place had numerous unintended consequences: aggravating unemployment and lost income; increasing stress, anxiety and social isolation; providing an accelerant to substance abuse, suicide, child abuse and domestic violence; and reducing the number of cancer screenings and non-COVID vaccinations.

By measuring “excess deaths” — the number of deaths over what would be predicted in a normal year — Agrawal et al. avoided concerns about the classification of COVID-19 deaths (did people die with COVID or because of COVID?). Different countries have different definitions for COVID deaths.

The pattern of excess death varies country by country and state by state. Stay In Place seems to work better for island countries and states (Hawaii). But overall in the U.S., the authors conclude, Stay In Place is correlated with an increase in excess deaths in the first 20 weeks following SIP implementation while trending lower after they have been in place 20 weeks.

The mortality rate during the peak of the pandemic in the U.S. was higher for areas that are “poorer, denser, racially segregated, and have a higher share of minority individuals,” the study says. “Excess all-cause mortality was highest in Black people and lowest for White people.”

The authors question the assumption that restricting peoples’ mobility slows the COVID-19 transmission. Many people voluntarily curtailed their own activities before the SIP policies were put into place. “It is also unclear whether modest reductions in mobility could slow the spread of an airborne pathogen,” they add.

The authors conclude: “Continued reliance on SIP policies to slow COVID-19 transmission may not be optimal. Instead, the best policy response may be pharmaceutical interventions in the form of vaccinations and therapeutics when the become available.”

Bacon’s bottom line: The authors were restrained in their conclusions. I shall not be. “Often wrong, but never in doubt” should be the motto of America’s new ruling class. Politicians, the commercial media, social media and other arbiters of “the truth” panicked the country into enacting Stay In Place policies that were (a) less effective and (b) had more unintended consequences than they could imagine.

Not surprisingly, America’s all-wise, all-virtuous cultural arbiters, who could easily work at home, were minimally inconvenienced by the policies they foisted upon the population at large. Equally unsurprising, their policies had a disproportionate impact on the poor and minorities who were employed in the industries most impacted. It is no accident that the rhetoric about “systemic racism” in health care ratcheted up in direct proportion to the rising death toll as the opinion-shaping, policy-dictating elites deflected their own failures onto “the system.”

The U.S. economy would have fallen into recession in the absence of Stay In Place policies as people most from the virus voluntarily curtailed their activities. But the widespread shutdowns compounded the health care damage with needless economic damage. America’s cultural elites are ruining the country, and the biggest victims are the purported beneficiaries of their tender mercies — the poor and minorities — who lack the resources and resilience to survive the misrule.

This entry was posted in Public safety & health, Regulation and tagged COVID-19, James A. Bacon. Bookmark the permalink.