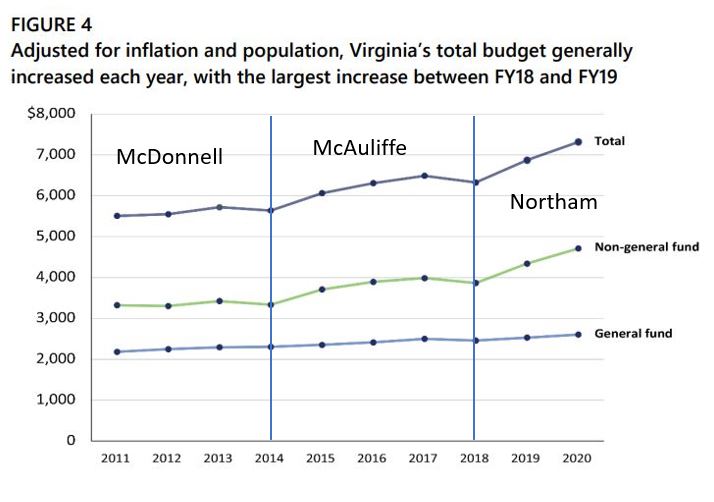 State spending has increased rapidly in Virginia over the past decade — by 2.6 % annually — even when adjusted for inflation and a growing population, according to a recently published Joint Legislative Audit and Review Commission report, “State Spending: 2020 Update.” In Fiscal Year 2020, the budget reached $62.6 billion.

Perhaps the most worrisome finding of the report is that spending grew faster than the state’s economy, which grew an anemic 1.1% annually on average after adjusting for inflation. The state’s rate of economic growth was barely half the rate of the 2.1% U.S. average. In other words, the state accounts for an ever increasing share of the state economy.

The spending increases were concentrated in a few areas: Medicaid, K-12 education, and transportation construction and maintenance. Virginia’s budget encompasses 148 agencies and 199 programs. The top 10 agencies account for two-thirds of all spending. 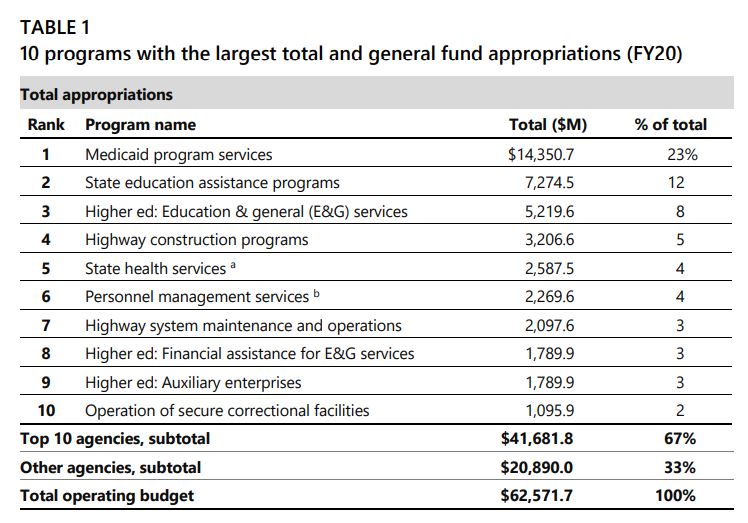 Bacon’s bottom line: For the most part, Republican Governor Bob McDonnell held the line on spending, although he succumbed to bipartisan pressure toward the end of his term to increase transportation taxes. As can be seen in the graph atop this post, Governor Terry McAuliffe loosened the spending purse strings. But spending didn’t reach escape velocity until the Northam administration.

The JLARC report does not show the impact of Governor Ralph Northam’s initiatives that are off the state books. The Governor has established the goal of a zero-carbon electric grid in Virginia by 2045, a program which the State Corporation Commission estimates will require $43.5 billion in additional capital investments over just the next 15 years at an average annual cost of $800 for a typical Virginia household. (See Steve Haner’s new post with the gory details.)

Northam campaigned as a moderate but his election marked an inflection point in state spending. Now that Democrats control the General Assembly as well as all three statewide offices, the new spending trajectory may represent the new normal.