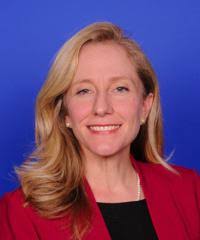 U.S. Rep. Abigail Spanberger, D-7th District, continues to draw international attention as a “New Look” Democrat from Virginia who is savvy about the intelligence community and global affairs.

The former CIA case officer was featured on CNN criticizing the administration of Donald Trump for ignoring reports that Russian military intelligence had paid bounties to the Taliban in Afghanistan to kill U.S. troops and members of the pro-U.S. coalition there.

Her comments were picked up by the British newspaper, the Guardian. This may be the first time that a woman Member of Congress has gotten so much exposure beyond borders of the Old Dominion.

Neither Dave Brat nor Eric Cantor, her Republican predecessors in the 7th district that includes parts of the once reliably Red Richmond suburbs of Chesterfield and Henrico, has gotten such exposure. The only other woman who has come close is U.S. Rep. Elaine Luria, a Democrat and former Navy officer who represents the 2nd District that includes Virginia Beach, another area that was once reliably Red.

On CNN June 30, Spanberger said that as a former CIA official she has “a lot of questions about who knew what when and what the next steps are.”

The New York Times and The Washington Post have reported that last year, perhaps earlier, U.S. intelligence officials and Special Forces troops had received information that a unit of the Russia GRU (Glavnoye Razvedatelnoye Upravledniye) was making cash payments to the Taliban for each U.S. solider or Marine killed.

The information was sent to defense and intelligence officials in Washington and was placed in the President’s Daily Brief (PDB), a tip sheet of some of the biggest security concerns that the White House needs to know. The White House has claimed the information was too uncertain to be brought to Trump’s attention. There is evidence that it was placed in Trump’s PDF and he did not read it. Some accounts claim that the intelligence was available perhaps as early as February.

Spanberger told CNN: “What concerns me most about these reports is that the Russian government was putting bounties on the heads of U.S. soldiers and our government took no action at the time when the president of the United States was still lobbying for Russia to be included in a G-7 summit, knowing that his government was responsible for the potential deaths of U.S. soldiers in Afghanistan . . .”

She said that she knows from her CIA experience that nothing gets put in the PDF unless it is vetted and thought credible. “I am beyond words at times over this…It’s just shameful and it’s so highly disappointing,” she said.

Spanberger and Luria have grabbed attention in their interviews and letters to newspaper editors. One such letter broke a logjam that was keeping the House of Representatives from considering Trump’s impeachment. The House did impeach Trump but the Senate did not approve removing him from office.

To be sure, the Russians have for years smarted over their decade-long incursion into Afghanistan that cost the lives of 15,000 Soviet soldiers. What turned the tide was the introduction, under President Ronald Reagan, of shoulder-held Stringer missiles that were used to shoot down numerous Soviet helicopters and other aircraft.

Former Soviet leader Mikhail Gorbachev ordered the troops withdrawn in January 1989. Working as a U.S. correspondent, I watched the withdrawal across a bridge from Afghanistan into Uzbekistan.

Spanberger, who won her seat in 2018, has been targeted by the state GOP. One possible opponent is Nick Freitas, a former Army Special Forces soldier. Freitas, who has raised $627,078 according to the Virginia Public Access Project, has stumbled since he failed to file certain election documents. He did the same thing in the 2018 race.

Spanberger has been deemed so important to the Democrats that she has raised $4,328,393, according to VPAP.

The Russian bounty matter isn’t going away. The New York Times reported today that U.S. officials have found evidence of bank transfers from the GRU to the Taliban.