Sorry, Abigail, the Culture Wars Are Just Warming Up 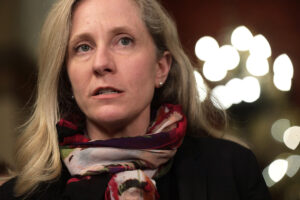 Abigail Spanberger: despite winning, not a happy camper.

[Spanberger] grew angry as she warned her party against some of the rhetoric she argued hurt moderate Democrats like herself, saying the election results were a “failure.”

“No one should say ‘defund the police’ ever again,” Spanberger said on the call, according to two sources. “Nobody should be talking about socialism.”

Spanberger also warned that if Democrats kept up their tactics in 2022: “We will get f—— torn apart.”

Spanberger has every reason to be concerned. She has narrowly won twice now in a congressional district that had been gerrymandered to vote GOP, and Republicans will continue to field candidates against her. She must stake out the middle ground politically. While Joe Biden might well succeed in ousting the polarizing Donald Trump from the presidency — the outcome is still too close to fall — I see little prospect of Democrats taming their rhetoric, either nationally or here in Virginia.

The ideological roots of the Democrats’ lurch leftward run deep, rooted in identity politics. Democrats have built their coalition around college-educated white elites and “people of color” — blacks, Hispanics, and Asians — confident that an inexorable demographic tide, driven in part by immigration, would ensure their political dominance for decades to come.

Democrats have adopted an ideology to match their political strategy. Early on, they elevated racial and ethnic “diversity” as an ideal to replace the old ideal of assimilation. As that concept became commonplace, they needed new differentiators. Beginning with the Trayvon Martin killing in 2012, the national media began cherry-picking similar tragic incidents and depicting them as if they were typical of everyday reality in America. This consciousness snowballed into the Black Lives Matter movement and the conviction that racism is endemic and deeply embedded in American society. Critical Race Theory, once regarded as an extremist ideology limited to the hot-houses of academe, suddenly sounded plausible to tens of millions of Democrats.

Virginia is no exception to these national trends. After his blackface revelations, Governor Ralph Northam began immersing himself in the literature of Critical Race Theory, which posits that whites are inherently racist and that America is an inherently racist nation. He then proceeded to institutionalize CRT in state government by appointing diversity directors, who then embarked upon “training” sessions and webcasts designed to disseminate CRT perspectives. This effort was most evident in the Virginia Department of Education. Education Secretary Atif Qarni, who openly embraced the concept of structural racism, began implementing policies designed to reduce unequal educational outcomes. These initiatives range from steering extra state dollars to failing schools to altering the admission criteria for the state’s governor’s schools including, most controversially, the Thomas Jefferson High School for Science and Technology in Fairfax County.

Northam’s endeavors are paralleled by similar initiatives in local public school districts — most visibly in Northern Virginia — and in many colleges and universities. Given impetus by the George Floyd killing this year, the administrations of the University of Virginia, Washington & Lee, Virginia Commonwealth University, Virginia Military Institute, and George Mason University have become convulsed with controversies over undoubted racist sins of the past and/or alleged racist sins of the present.

Civil War statues may be coming down across Virginia, but inequalities persist in the criminal justice system and, more broadly, in measures of education, health, housing and incomes. American society is riven over the causes of that inequality — to what degree are economic and political structures responsible, and to what degree are people responsible for their own decisions and actions — and what to do about it. President Trump can pass from the scene tomorrow, but Critical Race Theory isn’t going anywhere. Indeed, the increasing proclivity for Democrats to interpret every disparate statistical outcome and every unpleasant encounter between individuals through the prism of race virtually guarantees that racial sensitivities will rub more raw than ever. Insofar as progressives misdiagnose the causes of inequality, their policy prescriptions likely will aggravate the very disparities they seek to remedy, to which they will respond by doubling down on their rhetoric.

It is impossible to say how this will all play out. Critical Race Theory could hit a dead end. Asian American students (both East Asians and South Asians) tend to excel academically, and policies designed to create equal racial outcomes in elite schools and universities usually occur at their expense. As a consequence, there is a growing backlash in Asian-American communities against identity politics. Also, this year’s election has shown that Hispanics are not the monolithic voting bloc that Democrats once imagined. Many if not most Hispanics (encompassing many different countries or origin) aspire to joining mainstream culture. The Democratic obsession with anti-black racism does nothing for working- and middle-class Hispanics, most of whom identify as white.

One thing we can say with some assurance is that the conflicts engendered by identity politics will not go away. America’s dominant media institutions are as committed as ever to the America-as-racist-nation paradigm, and they still have frightening power to shape public perceptions and shape national narratives. Meanwhile, the Democratic Party is stuck with identity politics. Aside from outliers like Abigail Spanberger, most Democrats have drunk the Kool-Ade. They see racism everywhere. Intellectually, they have nowhere else to go.

Whether President Trump leaves the White House in January or stays, the culture wars engendered by the culture of victimhood and grievance will guarantee hostility and conflict for years to come.

This entry was posted in Culture wars, Uncategorized and tagged James A. Bacon. Bookmark the permalink.