Some Peoples’ Pain Matters More than Others’ 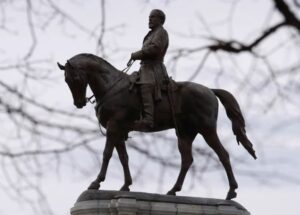 After George Floyd’s fatally brutal arrest, dozens of Confederate monuments were banished from civic settings throughout the South. And their ranks were further thinned last weekend, when Charlottesville’s equestrian statues to Robert E. Lee and Stonewall Jackson were finally hoisted off their pedestals after a prolonged legal battle.

But the fate of what may be the most important Confederate statue of all has yet to be determined. The magnificent equestrian tribute to Lee on Richmond’s Monument Avenue — the old Confederate capital’s principal venue for Lost Cause commemoration — is still standing. Its majestically rusticated granite pedestal, 40 feet tall, was hideously defaced with obscenity-laced graffiti during last year’s Black Lives Matter–Antifa agitation. Rings of graffitied jersey barriers and chain-link fencing eight feet high now gird the monument, situated on a turfed circle 200 feet wide. Despite some splashes of paint, the bronze statue itself appears undamaged, and its handsome silhouette, when viewed from a distance, is unimpaired.

Along with the conversion of Lee Circle into an anarchist’s playground, last year’s vandalization and removal of the other Confederate statues on Monument Avenue was one of the more widely publicized episodes of the Floyd protests. (A dozen statues or landmarks with Confederate associations came down in the city as a whole.) The avenue’s Stonewall, J. E. B. Stuart, and Jefferson Davis are gone; only their pedestals — and Davis’s elaborate architectural setting — remain. But unlike those statues, the Lee is owned by the Commonwealth of Virginia rather than the city of Richmond.

In separate suits before the state’s supreme court, five residents of the Monument Avenue historic district and a great-grandson of donors of the land for the Lee equestrian argue that Governor Ralph Northam, who ordered its removal shortly after the protests got underway, lacks the authority to do so. (Northam’s racial consciousness was raised a couple of years ago after a photo of a man in blackface and another in Ku Klux Klan attire was found on his medical-school yearbook page.) The plaintiffs have a strong case, but in Virginia’s toxic political climate, that probably won’t matter much. The court is expected to rule later this month or in August.

Confederate monuments wound up in the dock largely thanks to a tiny contingent of far-right militants and psychopaths — starting with Dylann Roof, who murdered nine African Americans in a church in Charleston, S.C., in 2015. Scrutiny of Richmond’s intensified two years later, after a white nationalist who came to Charlottesville to demonstrate against a municipal council vote to remove the town’s Lee statue drove his Dodge Challenger into a crowd of counter-protesters, killing one. Many have used these incidents, along with Floyd’s killing, to excoriate any notion that Confederate monuments are entitled to their historic presence in the South’s public realm. Of course, very few of those who disagree have the slightest use for Roof or obscure groupuscules such as the Loyal White Knights.

Skip back a generation. In 1997, the mile-long stretch of Monument Avenue with the four Confederate statues was designated a National Historic Landmark for reasons having nothing to do with advocating white supremacy and everything to do with culture and history. In an excellent survey of the world’s finest thoroughfares, Great Streets, published four years earlier, Berkeley urban-planning professor Allan B. Jacobs devoted seven handsomely illustrated pages of high praise to Monument Avenue, mentioning the Lost Cause in passing as a vestigial thematic backdrop on a superb residential boulevard. He observed groups of people, blacks and whites together, taking Sunday strolls along the avenue. Jacobs’s study, in turn, appeared a few years after the screening of Ken Burns’s engrossing five-part documentary The Civil War (1990), which presented a range of perspectives on the conflict, very much including African-American perspectives. The liberal intellectual climate of those years is a far cry from what we’re seeing now. Those who think the fanatical vandalism the nation witnessed in 2020, with everyone from Columbus to Lincoln becoming fair game, points to progress are seriously deluded.

The BLM-Antifa statuary rampage in Richmond and its indulgence by political leaders such as Northam and the city’s mayor, Levar Stoney, whose statuary removals were almost certainly illegal, testifies to the increasingly authoritarian intolerance of the American Left. Its focus on the symbolic purging of the nation’s public realm is all about power, not justice, and it completely ignores the intractable problems confronting the African-American underclass.

Those problems stand out in high relief in Richmond, half of whose inhabitants are black. Virginia Standards of Learning test results for 2018–19 (the most recent year for which figures are available) showed 50% of the River City’s black public-school students failing in reading and math, a far higher failure rate than white students’. Eighty-four percent of 2019 births of black babies were out of wedlock. Dismal conditions prevail in the city’s public housing. Fatal and nonfatal shootings in black neighborhoods have surged over the past year, while numerous Richmond police officers have left the force in the wake of Stoney’s weak response to the BLM disorders. Taking Confederate statues down has done, and will do, nothing to improve the situation.

In 1890, the year the Lee monument was completed, Virginia’s governor, acting with the state legislature’s authorization, signed a deed that included the state’s “guarantee that she will hold [the Lee] statue and pedestal and circle of ground perpetually sacred to the monumental purpose to which they have been devoted and that she will faithfully guard it and affectionately protect it.” Parties to the deed included the Lee Monument Association, which no longer exists, and — crucially — the family that donated the land for the monument.

The state contends it has a right to remove the statue, pursuant to Northam’s June 2020 removal order, thanks to a budget amendment that annulled the 1890 deed and was passed by the legislature months later. A Richmond circuit-court judge accepted this argument in ruling in favor of the monument’s removal last October. The plaintiffs maintain that the budget amendment is unconstitutional. In addressing the donor descendant’s claim that the state is attempting to dissolve, without legal justification, the covenant protecting the statue and the property easement he inherited, Virginia solicitor general Toby J. Heytens played the race card during oral argument before the state supreme court last month. “No court has ever recognized a personal inheritable right to dictate the content of core government speech about a matter of racial equality and this court should not be the first one ever to do so,” Heytens declared.

The drift of Heytens’s argument was that the Lee monument “speaks” in favor of racism — a cynical caricature of the statue’s honorific intent — and that to defend its retention is to advocate racism. This was a shot across the court’s bow. Its members have been duly warned that they can expect to be, and will deserve to be, targets of BLM and Antifa agitation if they don’t get with the statuary purgation program. Heytens’s argument also opens the door to removal of any Virginia monument to any historic figure whose racial views can be deemed to fall short of contemporary norms. It is disconcerting, to put it mildly, that not one of the justices responded to his outrageous declaration.

All too likely to be buried by the current political wisdom is the elementary fact that, for all its terrible shortcomings, the Old South imposed demanding standards of personal honor, courage, and self-sacrifice on its guardians. If they hadn’t been recognized as signal exponents of those virtues, Lee, Jackson, Stuart, and Davis would never have been commemorated on Monument Avenue. Of course, the story doesn’t end there. The story is complex. The problem is that complexity is anathema to the woke — who, not unlike the Klansmen of yore, inhabit a hopelessly simplistic, ideologically shriveled universe. It would be folly not to realize that intimidation is an essential part of their playbook, too. Certainly Toby Heytens does.

The searing injustices of the past are part of the South’s identity. The same goes for the region’s distinctive grandeur. For both reasons, eliminating a large portion of Richmond’s monumental heritage was a really bad idea. It’s also a really bad idea — especially in a state where opinions on the wisdom of retaining or removing Confederate monuments are closely divided — to focus on the pain that monuments cause some citizens while ignoring the pain their removal would cause others, as Patrick M. McSweeney, one of the plaintiffs’ attorneys in the Lee monument case, has noted. The Orwellian upshot is that some people’s pain matters more than others’. The best remedy in such situations is to focus on adding to, rather than subtracting from, a locale’s monumental heritage.

Once these lessons have sunk in, perhaps the River City can start thinking about how best to remedy the senseless damage to its public realm that was inflicted in the annus horribilis of 2020.

Catesby Leigh writes about public art and architecture and lives in Washington, D.C. This essay, published originally at National Review, has been republished here with the author’s permission.

This entry was posted in Culture wars and tagged Guest contributors. Bookmark the permalink.