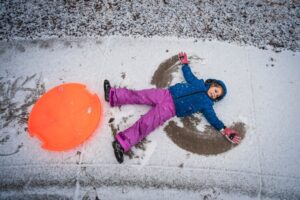 Sharpen your corkscrews, everyone. Snow’s a-coming.

Or so they say. Long-time residents of Virginia’s “rain-belt” — everything this side of Williamsburg — have learned to be skeptical of wintry forecasts.

I planned to write today about Ralph Northam’s latest press conference. But snow is more fun. And, frankly, weather is easier to understand than the latest vaccine news that emanated from Richmond yesterday.

Northam did casually mention that all Virginians should be vaccinated against COVID-19 by the end of summer.

Dammit. He’s moving the goalposts again. At his presser a few weeks ago Northam said “before summer.” I heard him. I wrote it down. He actually gave some of us a glimmer of hope for a speedy rollout of the vaccine and a summer filled with things like baseball. And bars.

Northam also extended his COVID emergency orders until the end of February. It’s time we called this what it is: an 10-month abuse of power with no legislative oversight. Many of us are beginning to wonder if Northam will ever let us stay out past midnight. Or if schools will ever reopen.

Speaking of schools. With this rare, wonderful forecast of snow, children ought to be hyperventilating and praying for a snow day.

The usual frisson of excitement is missing this year. After all, for most public school kids every day’s been a snow day since schools closed last March.

And even if we get a few inches, sea-level City Hall spoilsports outlawed sledding on the city’s only decent hill years ago.

That boneheaded ban was driven by a fear of lawsuits after the mother of an injured sledder successfully sued the Beach.

This time it seems only adults and private school kids are in the grips of snowstorm hysteria. I spied several shopkeepers sprinkling kitty litter on their sidewalks in the afternoon.

Fact is, Southerners are generally unprepared for snow. Heck, many of us don’t have hats, let alone snow shovels.

Last time it snowed, I raked my porch while my neighbors swept theirs with an old broom. I saw one guy trying to clear snow off his car with a sheet of cardboard. I caught another scraping his windshield with a Coke can.

Plus, the cities of Tidewater never invested in snow plows, so side streets go unplowed, which means a few inches of snow can trap us in our frozen neighborhoods for days.

That’s actually good, because no one who’s lived in the South for a decade or more should be allowed to drive on snowy roads. Remember the Great Blizzard of 2006 when an inch of snow fell across Virginia and the state police recorded 160 crashes?

The whole country was laughing at us. We even made the Drudge Report: “Virginia Drivers Cause Over 100 Accidents In Less Than One Inch Of Snow.”

I drove through two snowstorms last month during my whirlwind weekend trip to Utah.

It was terrifying. And I am not doing THAT again.

If there is any accumulation on the roads Thursday morning Mike Imprevento has promised to drive to my house in his monster truck so we can be behind our mics in time for the 9 a.m. “Kerry and Mike Show” on AM-790 WNIS.

But it won’t snow. Or will it?