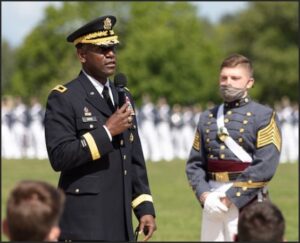 New rule at The Washington Post: it’s OK to insinuate that conservatives are racist for disagreeing with an authority figure who happens to be Black. No evidence of bias required.

The democracy-dies-in-darkness newspaper set a new low yesterday in an article published Monday describing how conservative alumni of the Virginia Military Institute decry the implementation of Diversity, Equity & Inclusion by the Board of Visitors and Superintendent Cedric T. Wins. Reporter Ian Shapira never comes out directly and calls the dissident alumni racist, but he makes the implication unmistakable. His rhetorical devices are a case study in slimy journalism that stops just short of libel.

Let’s start with the headline, which may or may not be Shapira’s composition but accurately reflects the tone of the article:

Shapira then leads this article with this:

Ever since Virginia Military Institute began rolling out new diversity, equity and inclusion initiatives last year, a fierce and well-funded group of conservative alumni has been attacking the efforts to make VMI more welcoming to women and minorities.

Here he supplies a motive. The alumni are attacking “efforts to make VMI more welcoming to women and minorities.”

The charitable word to describe this phrase is “misleading.” True, alumni are criticizing the DEI program, but they are not attacking it because they oppose making VMI more welcoming to Blacks and minorities. If they had ever expressed such a desire, Shapira would have quoted them to that effect. But they haven’t.

Rather, dissident alumni are attacking the DEI program because they believe DEI encourages cadets to focus on their identity by race, sex, and gender, which is antithetical to the egalitarian Rat Line/regimental system, which tears down previous identities, basic training-style, and remolds cadets as “brother rats” and VMI citizen-soldiers. One might disagree with the dissidents’ philosophy. One might disagree with their analysis of how DEI is being implemented at VMI. That’s fine. But Shapira ignores the philosophical differences entirely and frames the issues as based on race.

Now the mostly White alumni group has turned its sights on a new target: the first Black superintendent at the nation’s oldest state-supported military college.

Again, Shapira frames the controversy as a matter of race. I have interacted with dissident alumni for some two years now and I have never heard them allude to Wins’ race other than in passing and never as a negative. Shapira is making Wins’ race an issue.

True, some alumni have criticized the Board for giving Wins a $100,000 bonus, and others have called for him to be fired. Why? Because he is Black? No, because VMI has seen a 25% decline in entering 1st-year students. Reasonable people can disagree about why VMI saw such a decline and whether Wins bears responsibility. But it is not gratuitous to suggest that the decline might have been due in some degree to the massive wave of negative publicity (perpetrated largely by Shapira and the Post) of VMI as a racist, sexist institution and the seeming validation of that assessment by the Board and Wins through the implementation of DEI training and programs.

Shapira then runs this quote from Chuck Rogerson, a retired White Army colonel who roomed with Wins when they were cadets:

They can’t handle the change because they’ve never had to deal with it before — a man of color leading the institute. Did they ever question prior superintendents’ salaries?

Here the insinuation of racism becomes more explicit: Wins’ critics can’t handle the idea of a “man of color” leading the Institute. Rogerson’s putative evidence: they never criticized prior superintendents’ salaries. True, they didn’t. But that’s because they regarded the previous superintendent with great respect — not because he was White but because they shared his values and priorities. As it happens, dissident alumni disagree not only with Wins, who is Black, but with members of the VMI Board, most of whom are… White.

Almost comically in this context, Shapira quotes Board Chairman Tom Watjen, whom Shapira credits with overseeing the launch of the DEI program.

Any time people are attacking the superintendent, I’m going to be unhappy.… He’s the one that we’re counting on for helping to bring us forward and protect the mission and purpose of the institute to bring us to the next level, said Watjen, who is White. Every time he gets attacked, I feel attacked.

Here, Watjen poses as the Great White Savior. But he doesn’t need to feel attacked when Wins gets attacked. Dissident alumni have criticized Watjen directly. It is grotesque to suggest that dissident alumni have singled out Wins for criticism. Alumni have had plenty to say about the role of Watjen and the Board in the governance of VMI.

The article continues in that vein. Alumni, says Shapira, have “assailed” VMI’s first chief diversity officer, Jamica Love, “the college’s highest-ranking Black woman.” Get that? Alumni have assailed her, a Black woman — not the DEI policies she is implementing. “Angry” alumni, writes Shapira, have found a forum on WRVA’s John Reid Show. Shapira proceeds to quote not the alumni who appear on his show but Reid, a conservative but not a VMI alumnus, and to take issue with his views on DEI.

None of the alumni in question responded to Shapira’s requests for comments, which is understandable given his long-standing hostility to them, but he does quote Thomas Gottwald, a former board member who resigned during the Northam administration and was reappointed by Governor Glenn Youngkin, based on a recording of the board meeting. (Gottwald, Shapira reminds his readers, is White. And he donated $77,500 to Youngkin’s campaign.)

It’s not a small group of alumni who feel like their voice isn’t being heard right now. It’s a big group. To make broad generalizations about alumni, about anyone being critical of what is going on, is just one further implication that alumni need to just shut up and get in line, that dissenting opinions, different opinions aren’t encouraged or welcomed here.

Gottwald makes a valid point. That is the way the dissident alumni feel.

One might argue that I’m misconstruing Shapira’s article, that I’m reading insinuations of accusations of racism into his words. Let me respond by noting that the article has generated some 4,400 comments at last count, and most of the commenters are reading its intent the same way I do.

“Sounds like VMI is an incubator for white supremacy,” says one.

“I am SO SICK AND TIRED of elderly white southern racists clinging desperately to their white supremacy dreams,” says another.

There are genuine philosophical issues at stake. How is DEI being implemented at VMI? Is the emphasis on racial, sexual and gender identity compatible or incompatible with the Rat Line? These are issues that Shapira could explore if he chose. But to my recollection, he has never done so. Instead, he has cast alumni dissidents as reactionary White conservatives. With this article, he has gone further by insinuating racist motives.

Ironically, as much as the dissident alumni may disagree with Wins, any negative feelings they bear for him pale in comparison to the animosity they feel for Shapira. Alumni accord Wins respect for his distinguished military service, and they had high hopes for him when he was first appointed. The person they detest more than any other is a smug, Princeton-educated heir of a wealthy Kentucky bourbon-distillery conglomerate who uses The Washington Post to signal his superiority over his moral inferiors — Shapira himself.