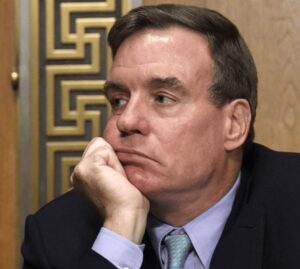 Warner has abandoned his responsibility as a Senator to represent Virginians in a reasonable manner. Instead, he has embraced the role of an arrogant, inside wheeler-dealer who (1) relies on secret negotiations by small, self-selected groups of senators, and (2) seeks to get legislation advanced without hearings, without a meaningful opportunity for public comment, and without reasonable legislative deliberation. Instead of being proud, Warner should be ashamed of himself.

Trying to cope with dysfunctional Congressional practices does not justify inflicting legislative flim-flam on the American people. The 2702-page infrastructure bill is not a solution to the current dysfunction on Capitol Hill. It is a stark symptom of the institutional rot that has infected Congress and corrupted the legislative process.

The bill makes is a mockery of representative democracy. Elected representatives are no more than rubber stamps for political deals made by a handful of officials negotiating without any meaningful legislative deliberation. And, it encourages the cynical and manipulative use of “comprehensive” or “emergency” legislation to obscure and camouflage policies, practices, and public expenditures that would be unlikely to be enacted into law or accepted by the American people if considered on their own merits.

Such legislative practices contrary to the basic principles of representative democracy.  There is no excuse for giving our elected representatives and the American people “the bum’s rush” instead of a meaningful opportunity to know what exactly is contained in proposed legislation.

“Hurry up, hurry up, don’t read the document, just trust me and sign it” may be expected of a confidence man, a huckster, or a shady business person; it is not appropriate for our elected representatives. No problem, however urgent, justifies passage of proposed legislation without any meaningful opportunity for Americans and their elected representatives to know, think about, and understand what is being proposed.

Virginians should demand their Congressional representatives refuse to vote for legislative proposals unless they have a meaningful opportunity to read, understand, think about such proposals, and engage in meaningful consultation with their constituents before voting on the proposals. Virginians should demand that their Congressional representatives refuse to quietly acquiesce in sham legislative deliberation, and show that they are able to carry out the duties and responsibilities for which they were elected.

Emilio Jaksetic is a retired attorney living in Northern Virginia.

This entry was posted in Federal and tagged Emilio Jaksetic. Bookmark the permalink.