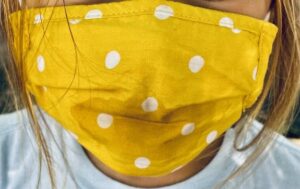 We know how we’re going to cast our votes before we enter the polling place.

But by the time we get to “school board” on the ballot we often suffer from ballot boredom. We either don’t vote for those offices or just shrug and cast our votes for familiar names.

This is a culture war and these leftists are digging in their heels.

Do masks reduce Covid transmission in children? Believe it or not, we could find only a single retrospective study on the question, and its results were inconclusive. Yet two weeks ago the Centers for Disease Control and Prevention sternly decreed that 56 million U.S. children and adolescents, vaccinated or not, should cover their faces regardless of the prevalence of infection in their community. Authorities in many places took the cue to impose mandates in schools and elsewhere, on the theory that masks can’t do any harm.

That isn’t true. Some children are fine wearing a mask, but others struggle. Those who have myopia can have difficulty seeing because the mask fogs their glasses… Masks can cause severe acne and other skin problems. The discomfort of a mask distracts some children from learning. By increasing airway resistance during exhalation, masks can lead to increased levels of carbon dioxide in the blood. And masks can be vectors for pathogens if they become moist or are used for too long…

Public-health officials claim to base their decisions and guidance on science, but there’s no science behind mask mandates for children. A new research study by one of us (Dr. Makary) and his Johns Hopkins colleagues found that of the $42 billion the National Institutes of Health spent on research last year, less than 2% went to Covid clinical research and not a single grant was dedicated to studying masks in children…

Any child who wants to wear a mask should be free to do so. But forcing them to make personal, health and developmental sacrifices for the sake of adults who refuse to get immunized is abusive. Before we order the masking of 56 million Americans who are too young to vote and don’t have a lobby, let’s see data showing the benefits and weigh them against the long-term harm.

There is no data to support muzzling children, and in fact, the CDC now admits that cloth masks, of the sort most kids wear to school, are of little if any value in preventing transmission of the Covid-19 virus.

Anyone suggesting that kids spend all day in N95 respirators, which are supposedly more effective, needs to wear one for a solid eight hours. That’ll disabuse them of this preposterous notion.

Let’s bring this closer to home.

Since the beginning of the pandemic, a hardcore majority of six Virginia Beach School Board members carried water for the teacher’s unions and worked tirelessly to keep schools closed. Last month they voted to keep masks on little faces.

So a political action committee, Students First VA, began circulating recall petitions. Several weeks ago, a group of seven Virginia Beach restaurants announced that they were holding sign-the-petition nights in their eateries.

Dottie Holtz, the most abrasive and wrong-headed member of the board, used her Facebook page to urge a boycott of these restaurants.

Three of the restaurants withdrew from the event after her call for the boycott. Holtz has since deleted her post.

Look, it’s a free country. Holtz can enthusiastically join cancel culture and try to wreck the livelihoods of entrepreneurs who don’t agree with her. But consider what her actions say about her thin-skinned character: This elected official wants those who disagree with her broke and bankrupt.

That attitude has no place in politics. Someone needs to remind this woman that restaurants suffered more than most businesses during the last administration’s lockdowns. Beyond that, these dining establishments pay real estate and business taxes that help pay for schools and Holtz’s salary. She owes them a little respect.

Supporters of parental rights in Virginia Beach clearly have a fight on their hands. Their strong allies on the school board number just three: Carolyn Weems, Vicky Manning and Laura Hughes.

Of the 11-member Beach School Board, six are up for re-election this year, including Holtz.

We plan to pay attention and keep laser-like attention focused on the school board candidates this November.

Let’s get petty bullies off the board.