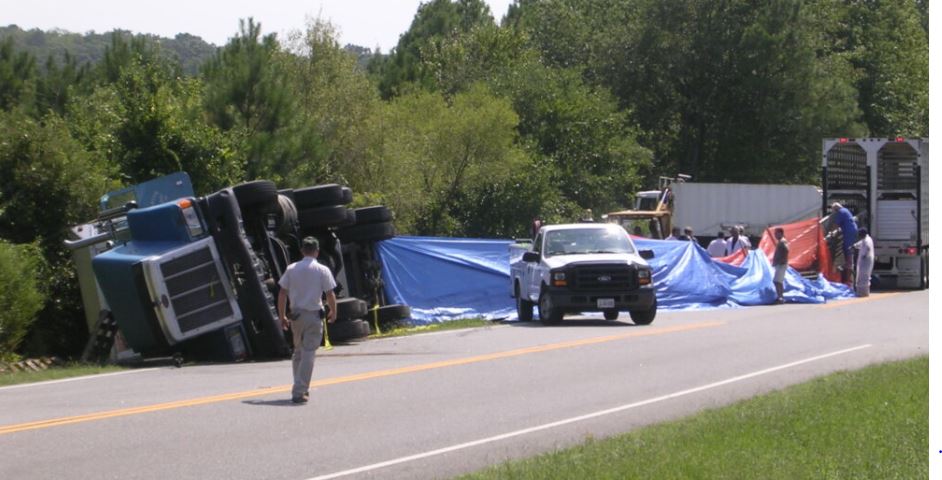 PETA wants the Virginia Department of Transportation to do something to stem the high rate of crashes involving hog trucks on State Route 10 in southeastern Virginia. The animal rights group has documented nine rollover crashes, each involving between 160 and 180 pigs. Some pigs die on impact, others are ejected from the trailer.

“It’s terrifying for the animals,” said Daniel Paden, PETA vice president, as quoted by The Virginia Mercury. “The fear and the stress of it is tremendous. Many of the animals injured are obviously bloody and lacerated. I’ve seen many animals with broken limbs, and I’ve seen quite a few animals who have what’s called ‘rectal prolapse,’ which is where their intestines actually come out of their body from the impact and stress. It’s a terrible situation obviously for the driver and other motorists, and the police, but there’s no question that it’s most awful for the animals.”

VDOT says it will conduct a safety study this fall for the Route 10 corridor with a specific emphasis on tractor-trailer crashes.

“Unfortunately — and I think Smithfield Foods would agree — these crashes will continue to occur as long as people eat pigs,” said Paden. “Still, my hope is that VDOT can do anything they can to help, for everyone’s benefit.”

Bacon’s bottom line: It’s nice to see someone besides Bacon’s Rebellion standing up for pig safety here in Virginia. Thank you, PETA. Pigs are highly intelligent social animals. It is a travesty to deem them any less worthy of protection than household pets. If those trucks were rolling over and slaughtering dogs or cats, there would be hell to pay!

On the other hand, let’s not get carried away. Stop eating pigs? That would mean no more bacon! That’s just lunacy.

This entry was posted in Bacon and pigs and tagged James A. Bacon. Bookmark the permalink.