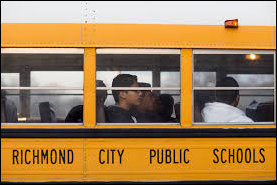 It just keeps getting worse. At least 280 students have been disqualified from receiving a high school diploma after a Richmond Public Schools review of student transcripts and irregularities in the granting of high school diplomas. At best only 810 students will qualify to attend graduation ceremonies — and the number could be smaller, the school board has learned. Only 507 seniors are currently “on track” and 303 are considered “likely” to graduate, reports the Richmond Free Press.

Twelfth grade enrollment in the fall of 2018-19 in Richmond Public Schools was 1,212, according to Virginia Department of Education statistics. How is it not the biggest scandal in the Commonwealth of Virginia when half the city’s seniors might fail to graduate? We’re not talking half of all those who entered high school, we’re talking about half of those who made it to their senior year!

Here are the racially-oriented social justice issues that Virginia media reported on over the weekend, as found in VA News:

Actually, that was a pretty lackluster weekend for Virginia’s SJW media. But the fixation of Virginia politicians, racial advocates, and pundits on racial symbolism — Civil War statues, governors posing in blackface 35 years ago, places named after Confederates, long-past racial injustices — compared to the under-reporting and under-analysis of massive institutional failures today is mind-bending.

Did Virginia’s segregationist regime do any worse in educating African-American youth 60 years ago than the Richmond Public School is doing today?

Did Virginia’s segregationist regime do any worse to perpetuate scandalous living conditions in crime-ridden, poorly maintained housing than the public housing authorities do today?

When will the media figure out it’s not 1959 anymore? When will African-American political and civic leaders insist upon holding accountable those who are wrecking Richmond public schools in 2019?

This entry was posted in Media, Race and race relations and tagged James A. Bacon. Bookmark the permalink.