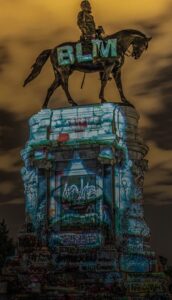 Since 1890, the Robert E. Lee Monument has dominated Richmond’s grand Monument Avenue and has stood as a striking protector of the state’s long history of systemic racism.

True, other Confederate heroes such as Thomas “Stonewall” Jackson and J.E.B. Stuart also found a memorial spot on the Avenue but Lee has always been the main one. He has been a sentimental touchstone for romantics of the Lost Cause and of derision about people hurt by the system.

Now, Richmond and Virginia are paying a price for more than a century of refusing to own up to what it all really meant.

The famed National Geographic magazine has made a cover photo of the defaced Lee statue repurposed as a memorial to George Floyd, the Black man who was killed by police after he was arrested and handcuffed.

The Geographic was listing the top photos of 2020, a wild and depressing year that brought the coronavirus pandemic, riots in cities and the constant chaos of Donald Trump.

That’s not all. In October, The New York Times Magazine proclaimed that the defaced Lee monument was the most influential work of art since World War II.

In terms of marketing, such attention by the top powers of the Mainstream Media wouldn’t be considered a good thing for Richmond, which has always resisted moving into the future. While the city has been enjoying a pre-COVID renaissance in arts and culture, the past sticks to it like kudzu.

But then, Richmond is getting what it deserves. Even today, there are bitter legal battles over removing the Lee statue. The others have been taken down. The statue proponents are insisting that outsiders do not understand the real meaning of Lee and the others.

Their stubbornness flies against a profound reassessment of the systemic racism that has crippled Richmond, the state and the country. It is long overdue although some on this blog believe that systemic racism, like the Trump Administration, does not exist.

With exquisite timing, author and journalist Isabel Wilkerson has come out with a provocative new book that explores how caste, and not just racism, has shaped America. “Caste: the Origin of Our Discontents” notes that Blacks have always been forced into the lowest caste ranks. She also wrote the magnificent “The Warmth of Other Suns,” a study of the Black diaspora from the South to the North over the years.

Wilkerson argues that racism is an insufficient term, since parentage and blood mixing have always been going on and make it hard to determine what “race” a person really is. As structured by a society, such as America or India, caste puts a permanent definition on the rungs on the ladder. It is done by slavery, laws, social restrictions on marriage, job hiring, housing, medical care and other factors.

And, of course, Virginia is strong on the lists of “firsts.”

The first slaves brought to the English colonies arrived on the Virginia peninsula in 1619.

The first restriction on race mixing happened in 1630, when the Virginia General Assembly sentenced Hugh Davis to public whipping for having “abused himself to the dishonor of God and the shame of Christians by defiling his body by lying with a Negro.”

At the same time, the woman was considered the bearer of race and caste, instead of the man, who had before been the determining factor. In so doing, Black slaves could be breeders of half-white children who will still be regarded as “colored.” They were automatically slaves and could be forced to work or be sold. That made Black women profit centers, Wilkerson writes.

In another “first,” in 1691, Virginia became the first colony to outlaw marriage between blacks and whites, a ban that the majority of states would take up for the next three centuries, Wilkerson notes.

In 1924, Virginia passed the strictest racial definition in the country. a “White” was one who had completely “White” blood unmixed by any other.

About that time,  when German Nazis were considering a vast social structuring to ensure the dominance of Aryans over inferiors such as Jews and Eastern Europeans, they turned to the United States for the best examples of how to boost eugenics and erect an efficient system based on caste and race. Guess which state was a favored model?

I haven’t finished the “Caste” book but I highly recommend it. Meanwhile, the reconciliation of things like the Lee statue is long overdue.