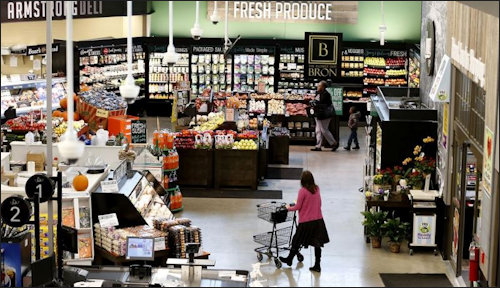 It is part of the liberal/progressive catechism that inner city neighborhoods across the United States, including Virginia, are afflicted by “food deserts” — large swaths of territory lacking access to stores selling fresh fruit, vegetables and other healthy foods. This deprivation is typically seen as a failure of the free-market system that requires remedy.

Seeking to do some good, Richmond philanthropist Steve Markel financed construction of a grocery store in the heart of the city’s East End — The Market @ 25th — and launched it to great fanfare a half year ago. The store served multiple laudable ends. It anchored a mixed-use development including 42 apartments, retail space, and office space in a depressed part of the city. It opened with 98 jobs, creating employment opportunities for the East End’s poor. And, most notably, it provided a source of fruit, vegetables, and healthy food.

Now we hear from the Richmond Times-Dispatch that the noble endeavor is encountering difficulties. The independent grocer has suffered millions of dollars in operational losses. Through layoffs and attrition, the staff has shrunk by a quarter since opening. Perhaps most discouraging of all, many of the store’s hoped-for poor African-American customers say the prices are too high and see the story as the spear-head of gentrification.

The Market @ 25th may yet survive. Markel has promised to continue supporting the enterprise as long as its losses decrease over time. Store managers are reaching out to dozens of “partner organizations” in the neighborhood for feedback. And management is making adjustments. To boost foot traffic, the store now sells cigarettes (not exactly a health product), and has added a “dollar aisle” — right across from the wine selection.

But the store still battles a negative perception in the neighborhood. Developer/operator Norm Gold summarized a widespread view: “The perception was that … the store was strictly here because gentrification is coming this way and the store is going to be profitable to take advantage of the gentrification.”

Here is the unspoken dilemma. Inner-city residents have different tastes and different price points in food than middle- and professional-class gentrifiers. They can’t afford the high prices of a small, independent store in which patrons are paying for the convenience of not driving several miles to Wal Mart or Food Lion. According to the T-D article, the average customer spent $21 in the first few weeks of the month. The figure decreases to $15 toward the end of the month as food stamp )Supplemental Nutrition Assistance Program) benefits run out. Question: If a poor customer has $21 to spend, how likely are they to pay $20 for a bottle of cabernet sauvignon?

Price aside, poor people don’t share the same obsession with health food. The reason that convenience stores (in the inner city and elsewhere) sell junk food, soft drinks, and cheap starchy foods is that they are most in demand. Kale and quinoa are not.

Then there may be a more subtle problem: Many poor African-Americans may not appreciate it when white people tell them to alter their diets. There’s a PhD dissertation just waiting to be written on the white foodie movement in the inner city as a form of cultural imperialism.

If you want to transform the food desert, you have to do two things. First, you have to change peoples’ tastes and eating habits, a very difficult thing to do — as anyone who has ever tried to change their diet in order to lose weight and improve heart health can tell you. Second, you have to provide healthy foods at a price point poor people can afford.

If you want poor people to start eating healthier, teach them in schools, cooking classes, and church programs how to buy, prepare and cook healthy meals that appeal to their taste buds. Then spend more philanthropic dollars figuring out how to provide healthy foods at a price point they can afford. Finally, recognize that change needs to come from within the communities. If the change agents are perceived as do-gooder whites imposing their own tastes and values on the community, they won’t get far.

This entry was posted in Poverty & income gap and tagged food insecurity, James A. Bacon. Bookmark the permalink.