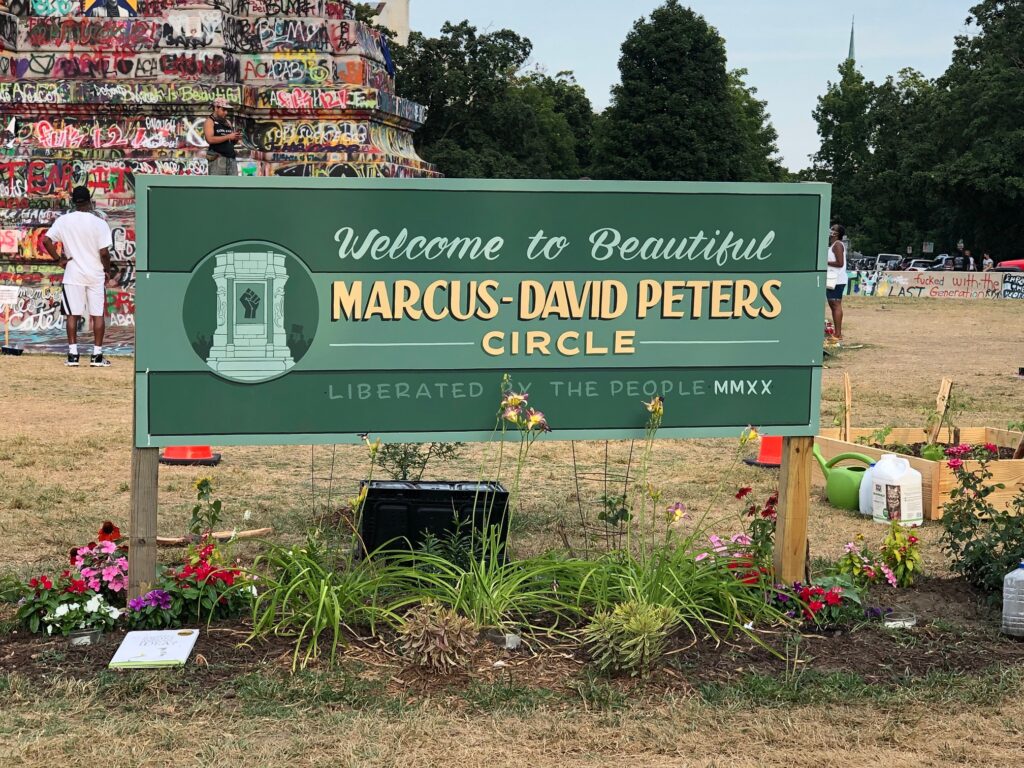 Richmond City Council has taken up discussion of the demand by social-justice protesters to “defund the police.” Richmond is not Minneapolis, or Portland, or Seattle, and the three-person finance committee charged with making funding recommendations for the full council has split the baby. Instead of full defunding, the committee supports asking the Richmond Police Department (RPD), in effect, to recommend how to partially de-fund itself.

If City Council approves the committee’s recommendations, reports the Richmond Times-Dispatch, RPD will identify funding in its budget for mental health, substance abuse, and social service functions that could be reallocated to other departments, and submit a report by Oct. 1 on where the money would go.

The half-measure is unlikely to satisfy militant Black Lives Matter advocates, many of whom spoke at the virtual public hearing yesterday. “We demand that funds be reallocated from the Richmond city police department’s excessively large budget, and reinvested in our community,” said Princess Blanding, sister of Marcus-David Peters, a tragic figure who was killed when threatening police during a mental health crisis in May 2018. Militants occupying the Lee Circle on Monument Ave. have renamed it in Peters’ honor.

Neither will the committee’s half measure likely satisfy the city’s new police chief Gerald Smith, who said RPD would require more money, not less, to address the systemic changes called for during recent protests. It will be difficult to extract the funding for the specific areas in the resolution, he said, because they are “intertwined in other things.”

The debate occurs against the backdrop of continued demonstrations as well as the effective takeover by activists of the Lee Circle, where the Robert E. Lee statue still stands while legal challenges to its removal work through the courts. The site is placid during the day, occupied by two or three dozen people who are mostly chatting and milling around. When I visited recently around 6 p.m., there were a couple of tents where vendors were selling trinkets, and a couple of men were shooting hoops in a portable basketball net. Families with children were walking and riding bicycles through the streets of the Fan neighborhood a block or two away. 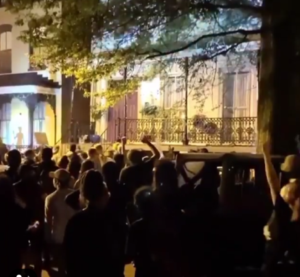 But the atmosphere changes at night, especially on Saturday nights, when large crowds continue to hold demonstrations. I have spoken to neighbors who say they have experienced spray-paint vandalism, loud noise, people defecating in their front yards, and the occasional physical assault. Neighbors are reluctant to speak out for fear of protesters mobbing their houses as they have done to Mayor Levar Stoney, and more recently, to Councilwoman Kim Gray. Gray, who represents the area around Lee Circle, has called for ending the “community project” at Lee Circle. Police often don’t respond to calls for service, and residents feel at the mercy of the mobs that periodically assemble. One resident likened the anarchy to Seattle’s notorious CHOP district where anarchists created a police no-go zone for several weeks before police finally intervened. 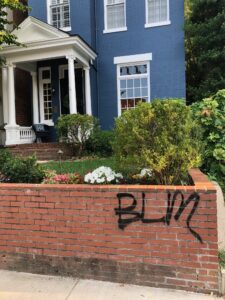 While the atmosphere is calmer than it was when the demonstrations were at their peak, incidents still occur. Two days ago, the RPD online incident blotter reported a vandalism incident on the 1800 block of Park Ave., about a block from Lee Circle. I presume the call referred to the graffiti shown in the photo here, which I took shortly after the report was filed. I have been told off the record of far more serious incidents, which I am trying to confirm.

The appetite in Richmond for Minneapolis-style defunding doesn’t extend much deeper than a few thousand highly motivated militants. But the demonstrators are loud, they are visible, and they don’t hesitate to intimidate those with whom they take issue. Conversely, those who oppose them are cowed by police inaction into silence. Despite widespread support on Monument Ave. for a lawsuit filed last week that accused Stoney of failing to abide by the law when he unilaterally took down several Civil War statues in the past month, only two individuals were willing to sign their names to the suit. Both are in their 90s.

This entry was posted in Crime , corrections and law enforcement, Culture wars, Race and race relations and tagged James A. Bacon. Bookmark the permalink.