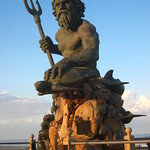 They think they’re so clever. Richmond Democrats, that is.

They believe that by forcing Virginia Beach to adopt a ward voting system – without first bothering to find out what the people want – they can turn the city council blue.

What other reason could there possibly be for passing a bill — on a party-line vote — that appears to affect only one city in the commonwealth?

But not so fast, Democrats.

A ward system also favors underfunded grassroots candidates with devoted followers who are willing to invest shoe leather in a campaign. You know, tea party types. Careful what you wish for.

A bill, introduced by Del. Kelly Convirs-Fowler – HB2198 – that would force the Beach to give up its odd hybrid system of elections, passed the Senate this week and is headed for the governor’s desk. (Convirs-Fowler has said she does not know if any other Virginia cities use a system similar to the one at the Beach. You’d think she would have done a little homework before submitting the measure.)

Is there any chance Ralph Northam won’t sign the bill?

Nope. None at all.

As it stands, the 11-member Beach City Council consists of a mayor — elected at large — three at-large members and seven district representatives who are also elected at-large although they’re required to live in the district they represent.

This means that every voter in the commonwealth’s largest city can vote for every seat in every council and school board contest.

Frankly, the current system is confusing. Candidates on the campaign trail are constantly explaining to voters that although they may live in say, Kemspville, they can still vote for the Bayside candidate.

It also means that it’s devilishly expensive to run a campaign in the Resort City. With roughly 450,000 residents and a city that’s almost 500 square miles, candidates need to raise mega-bucks to compete. Former Mayor Will Sessoms, for instance, raised a staggering $735,508 in his final bid for the top job in 2016.

Last summer, Councilwoman Jessica Abbott asked for a referendum on November’s ballot to gauge public support for a change in voting.

She was shot down by her colleagues who said there wasn’t enough time to “educate” the public about the issue.

On the eve of the Richmond vote, Mayor Bobby Dyer fired off a letter to state senators asking them to allow the city to take the temperature of the voters — with a referendum this fall — before making changes.

The senate ignored the mayor, which means the city council will have to decide by the end of the year whether Virginia Beach should have a ward system or a purely at-large city council.

Look, ward voting would be good for Virginia Beach. It would neutralize some of the influence of the city’s power brokers and it could increase the chance of electing more good government types like John Moss and Jessica Abbott.

But the voters, not the General Assembly, should make the change.

This move by the General Assembly is wrong. Richmond’s Democratic majority is bullying Beach voters and bigfooting the election process.

Exactly what we’ve come to expect from this imperious gang in Richmond.

This entry was posted in Electoral process, Politics and tagged Kerry Dougherty. Bookmark the permalink.