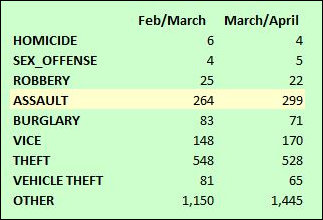 Some people of my acquaintance have wondered what the COVID-19 epidemic might do to the thin veneer of civilization that we Americans take so for granted. When people are living cooped up for weeks on end — with the prospect of social distancing extending for several months more — how will they behave? Will we see more domestic violence? Will people begin looting?

We’re only a month or so into intense lock-down, but so far the limited evidence is encouraging. We’re not seeing a crime wave.

On the grounds that the City of Richmond is one of the state’s most crime-prone jurisdictions, I took police department data for the period Feb.15 through March 15 and March 16 through April 16 to compare the number of crimes reported. For many categories — homicides, robberies, burglaries, thefts, and vehicle thefts — crimes declined. Perhaps the bad guys are staying inside their houses and not roaming the streets.

On the other hand, there was a 13.2% surge in the number of assaults. Does that constitute evidence of an increased incidence of cabin fever? I am not schooled enough in the statistics of crime to know if that increase is significant or falls within the normal range of monthly variation. Perhaps readers can weigh in.

This entry was posted in Crime , corrections and law enforcement and tagged COVID-19, James A. Bacon. Bookmark the permalink.