Reward Teacher Heroes, Not Those Who Stayed Home 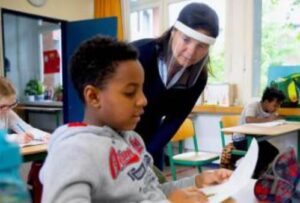 This teacher deserves society’s thanks.

In his state of the Commonwealth speech last night, Governor Ralph Northam made some proposals worth cheering and some that bear closer scrutiny. I’ll get to them in future posts. But one remark in particular stands out as totally wrong-headed — the idea, in the year of COVID-19, of giving every teacher a pay raise. Said the Governor:

School staff and teachers have made great sacrifices this year, and I thank them. … Investing in education includes giving teachers a pay bonus.

A few weeks ago Northam proposed giving teachers a bonus bump in pay. With an improving revenue picture, he said in the speech, “We’re going to have more money than we thought. We need to make this teacher bonus a raise, and make it more than two percent.” 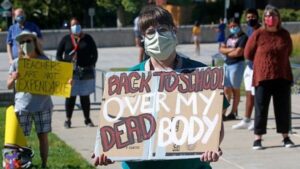 This teacher deserves nothing.

Time for a reality check. Some teachers and staff have made extraordinary efforts during the COVID-19 epidemic. They deserve society’s thanks, and they fully warrant a reward for their selflessness. But not all teachers and staff did.

Many, most visibly those associated with teachers unions, have scuttled efforts to return to in-person learning despite the facts that (1) most private schools and some public schools in Virginia have demonstrated that teaching students at school can be done safely, and (2) a vast body of international experience says the same thing.

The only way in which many teachers can be said to have made “great sacrifices” is their willingness to sacrifice the well-being of Virginia’s children to avoid any risk to themselves.

Here’s my proposal: Stick with the bonus instead of an indiscriminate across-the-board raise. Reward those awesome teachers, bus drivers and staff who surmounted their fears and serve children in-person at school. They are the heroes and heroines, and they should be recognized for their devotion to Virginia’s youth, not those who chose — nay, demanded — to stay home.

This entry was posted in Budgets, Education (K-12) and tagged James A. Bacon. Bookmark the permalink.