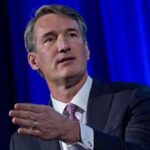 The Republican race for governor gets more interesting by the day. Initially, it looked like a race between two well-known politicians: former Speaker of the House Kirk Cox and Chesterfield Senator Amanda Chase — an establishment figure versus a Trump insurgent.

Then Merle Rutledge, an African American from Southside, threw his hat in the ring. Admittedly, he’s a fringe candidate who seems to be running a one-man campaign. The media have consistently ignored his existence, never mentioning his name when listing the Republican candidates, which, frankly, strikes me as kind of racist. But he is colorful, as anyone who visits his campaign website can see.

On Monday Glenn Youngkin, who has childhood roots in Chesterfield County and lives in Northern Virginia, officially announced his candidacy. Independently wealthy after a career with the Carlyle Group, the Washington, D.C.-based private equity giant, he retired in September to focus on “community and public service efforts.” He and his wife launched the nonprofit Virginia Ready Institute to retain workers idled by COVID-19.

Youngkin has never held public office, which he sees as a selling point. Virginians are tired of the political games they’ve seen on the right and the left over the last few years,” Youngkin’s campaign manager Garrison Coward told The Washington Post. “The political insiders have been smothering Virginians’ best interests with their special interests. Glenn is a breath of fresh air that will bring conservative solutions to everyday problems.” He has the background and looks of someone who can win support in the business community.

Another Republican, Sergio de la Peña, a Fairfax County resident, army veteran and Trump administration official, also announced his candidacy Monday. After a 30-year military career, he served the Trump administration as deputy assistant secretary of defense for Western Hemisphere affairs. In a state in which the military has such a strong presence, his army background might help him with an important constituency. What makes de la Peña an unusual candidate for the Republican Party is the fact that he is a Mexican immigrant — albeit a legal one. It will be interesting to see if can make inroads in Virginia’s growing Hispanic community.

De la Peña told Inside NoVa he is running for governor because “the American Dream is under assault from far-left socialists seeking to destroy this country by attacking our freedoms and values. It’s here in Virginia, the birthplace of American democracy, the land of our Founding Fathers, that we make a stand.”

A couple of days ago I published a post exploring the potential for a Virginia GOP meltdown in a two-way race between Cox and Chase, pitting Trump partisans against Republicans who’ve had enough of the soon-to-be-ex president. The entry of two new candidates scrambles that calculus. From the bits I can glean from published reports, Youngkin comes across as a pragmatic, results-oriented establishment Republican. De la Peña likely fits into the Trump wing of the party. His advantage is that he has none of the baggage that Chase has accumulated for herself. However, one can be certain that if he gains traction, opposition researchers will ransack his tenure as a Trump administration official for discrediting information. If the blacklisting of Trump officials gains momentum, his service could become a big detriment.

The Democratic Party of Virginia has just as many gubernatorial candidates, but there’s not as much riding on the outcome. The DPV isn’t facing an existential schism like Republicans are. Can one of the GOP candidates paper over the deep fissures within the party and emerge as a credible contender this fall? Grab the popcorn and settle in for an entertaining spectacle.