Repeat After Me: Development of Event Arenas Should Be Left to the Private Sector 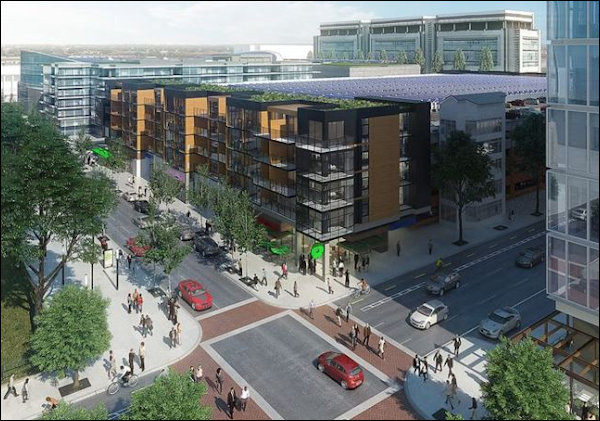 The big economic-development controversy in the City of Richmond these days revolves around a $1.5 billion plan to redevelop Navy Hill, the name given a large tract of mostly city-owned land downtown now devoted largely to the aging Richmond Coliseum and surrounding parking lots. Everyone agrees that the land should be re-developed as a walkable mix of residential, commercial and retail. The key sticking point is on how to finance the public improvements — whether or not to create a Tax Increment Financing (TIF) district, and how far to extend the boundaries of that district in order to ensure investors that the bonds will be paid off.

The controversy has swirled around and around, but I have yet to see anyone focus on the most critical issue: Does the project need to spend $235 million to build a new arena?

To be sure, the old arena, the Richmond Coliseum, has been closed, is unsalvageable, and costs the city $1 million a year to maintain. It needs to be torn down to make way for something new. No one disagrees. The question is who should pay to replace it, and who should take the risk of business failure — city government or the private sector?

Under the proposal backed by Mayor Levar Stoney, the city would own the new arena but NH District Corp. (NHDC), the developer behind the project, would operate it. The $235 million cost would be subsumed by the larger $1.5 billion redevelopment project, which will be financed by municipal bonds, and the municipal bonds will be repaid with tax revenues generated by the redevelopment. Typically TIF projects are financed by revenues from redevelopment in the area where the public improvements are being made. The Navy Hill project, however, would extend the tax district into high-value areas of downtown that will not benefit from the public expenditures.

NHDC contends that the project will generate an additional $1 billion in incremental tax revenue over the next 30 years. That’s great if things work out. But that projection assumes there are no big economic hiccoughs along the way, that redevelopment doesn’t stall, and that property values and tax revenues don’t tank — in other words, that the United States doesn’t experience a recession of the magnitude that it did, oh, say, eleven years ago. If things don’t go right, revenue from a chunk of the city’s tax base will be put at risk that would not have been otherwise.

My question is this: What would the project look like without the arena? If developers take the $235 million arena cost out of the equation, how much would the tax district have to borrow? Could the special tax district be strictly limited to the area being redeveloped? Would deletion of the arena hurt the prospects for redevelopment — or actually improve them?

Richmond has lost event-related revenue and jobs to Washington, D.C., Raleigh, Charlotte, Charlottesville, and even Virginia Beach, Stoney has said. “It’s time to give our city and its residents a venue they deserve and the economic opportunities that come with it,” Stoney has said.

With all of Richmond’s competing needs, are event-related jobs the kind of economic opportunities the city really wants to create?

Here’s an idea: Let’s analyze the arena on its own merits as a stand-alone business entity. If there’s a business case to be made for building it, let the private sector take that risk. Don’t hide the arena in a larger project and spread the risk via a special tax district to Richmond taxpayers.