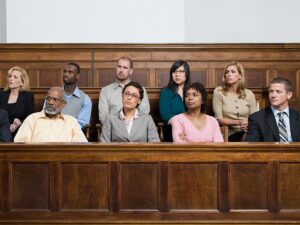 While there are several high-profile bills on police and criminal justice reforms making their way through the General Assembly, another, less-noticed bill, SB 5007 (Morrissey, D-Richmond), ending jury sentencing, has the potential to have as great an impact on the Commonwealth’s criminal justice system as any of the others.

Currently, in Virginia, if there is a jury trial in a criminal case, the jury determines the guilt of a defendant and, if it finds him guilty, makes a sentencing recommendation to the judge. The judge may impose a lower sentence than recommended by the jury, but not a higher one. It is unusual for a judge to impose a sentence other than the one recommended by the jury. SB 5007 would restrict the role of the jury to the question of guilt, with the judge determining the sentence, unless the defendant requested that the jury also determine the sentence.

This is not a radical idea. However, some Republicans tried to depict it as such, with Sen. Thomas Norment (R-James City County) declaring that it “stands the criminal justice system on its head.” The fact is that judges, rather than juries, in 44 other states and the federal judicial system determine the sentence after the jury finds a defendant guilty. The Commonwealth is one of only six states in the country that allows juries to determine sentences.

Nevertheless, the legislation would have a profound impact on the Commonwealth’s criminal justice system. In the words of one defense attorney, “This is the biggest reform that could happen in criminal law in Virginia…. If you want a more fair system, there is nothing close to this reform.”

To understand why this change seems to be such a big deal, one needs a little background on the realities of Virginia’s criminal justice system. Under law, the Commonwealth’s attorney can insist on a jury trial, even over the defendant’s objections. Juries in Virginia generally hand down much tougher sentences than do judges for the same offenses. The inability of juries to have access to the sentencing guidelines that judges use may be a major reason for this propensity to sentence higher. Also, juries do not have the flexibility that judges do. For example, they cannot suspend all or part of a sentence nor can they provide that sentences for multiple charges be served concurrently, rather than consecutively, all of which judges can do.

Defense attorneys are well aware of these differences and they so advise their clients. Because prosecutors can force a defendant to have a jury trial, they have the upper hand in negotiating a plea bargain. They can offer plea deals with fairly stiff sentences, thereby placing the defendant in the difficult position of accepting an offer with a relatively stiff sentence or taking his chances with a jury and getting a higher sentence if found guilty. Even a defendant who is actually innocent may find himself in this quandary if there is some evidence pointing to his guilt. SB 5007 would eliminate the threat of a jury sentence that a Commonwealth’s attorney now can use as leverage.

Partly because of the danger of submitting to a jury trial, the vast majority of criminal trials in Virginia are either bench trials adjudicated by a judge or plea deals negotiated by the prosecution and the defense and agreed to by the judge. It is estimated that only 1% to 2% of criminal trials are decided by a jury.

If the legislation were to result in more jury trials, there could be additional costs—additional judges, additional staff for clerks’ offices, more sheriffs’ deputies for court security, additional charges for court-appointed attorneys, and more juror per diem payments. However, because it is not feasible to project the extent to which the number of jury trials may increase, it is not feasible to estimate any potential additional costs. Furthermore, the bill’s proponents contend that the bill will not result in a significant increase in the number of jury trials, at least not in the long run. Rather, the system, they predict, will reach a new equilibrium, with Commonwealth’s attorneys offering plea deals that are more in line with sentencing guidelines. (The Daily Press has an excellent article providing more detail on the implications of the legislation, including the example of a defendant who turned down a plea deal offer of 15 years and took his chance with the jury, which ended up giving him 128 years and 1 day.)

I like this legislation. At first I did not realize that Virginia was only one of a few states that used jury sentencing. I also did not appreciate all its implications. Each person accused of a crime has a constitutional right to a trial by a jury of his peers. He should not have to feel pressure to forfeit that right because the system is skewed in such a way that he may be severely penalized after choosing to exercise it.

This entry was posted in Commentary, Courts and law and tagged Dick Hall-Sizemore. Bookmark the permalink.

10 responses to “Reinforcing a Constitutional Right”