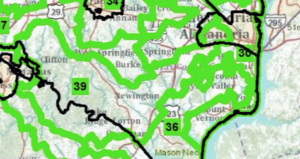 Something must be going right. Sen. George Barker, D-Alexandria, has threatened to resign. Seems he is unable, at least so far, to pick his voters in the redistricting process.

Virginia’s new bipartisan redistricting commission is working the details with two months to complete its work.

Barker is on that commission. But he lives in Clifton, at the western tip of the current 39th Senate district. Oops.

His current 39th Senate District (pictured above) resembles a golf driver in which he lives in the toe. But his comfortable Democratic margins live in the shaft of the 39th that reaches all the way into Alexandria.

As a matter of fact, the state’s Democrats are packed so thickly in Northern Virginia that geographically compact districts can produce fewer, not more, Democrats in the General Assembly.

So they won’t be geographically compact. But Sen. Barker apparently lives too far from the main Democratic vein to merit an exception.

“I think I would be submitting my resignation from the Senate today” if the draft maps — which only covered northern Virginia — are allowed to stand, said Sen. Barker, a Fairfax County Democrat who found himself drawn out of his district in both versions of maps reviewed by the commission Tuesday.

Clearly neither version would allow Barker to amass 65% of the vote without getting out of bed. Can he move? Certainly. It’s a free country. Tricky politically, though.

Redistricting is going to affect both Democrats and Republicans in both Houses. Because of the facts of the 2020 census, it is likely that more Republicans than Democrats will be disadvantaged.

But is worth noting that Barker is the leader in the clubhouse in the first round of whining. The hospital lobby will be disappointed if he doesn’t get re-elected, but it is very flexible and will adjust.

Overall this is good news. The re-districting commission appears to be working to draw more credible districts, at least so far.

This entry was posted in General Assembly, Politics and tagged James Sherlock. Bookmark the permalink.