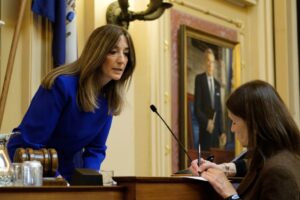 On July 30, 2020, I served a Virginia Freedom of Information Act request on House of Delegates Speaker Eileen Filler-Corn regarding her removal of the Lee statue and other artifacts from the State Capitol, specifically inquiring as to who she hired, how much they were paid, and where she stored the artifacts which are the property of the people of the citizens of the Commonwealth of Virginia. I also asked her if there was a competitive bidding process for the contract or contracts.

Her reply was:  “The requested records do not exist.”

Faced with this mysterious response, I was compelled to file suit against Speaker Filler-Corn in the General District Court for the City of Richmond on August 11, 2020. (Case No.  GV20014728-00).

I don’t want to go into too many details but Judge Thorne-Begland was clearly skeptical that this entire affair could have been pulled off without a single document being generated. He stated:  “I mean, I don’t — I never have worked in the state legislature, but I would imagine the hiring of a conservator would require a piece of paper.”

I plan to subpoena Speaker Filler-Corn and have her testify as to how she could have pulled off the removal of all these artifacts without generating a single document. Out of an abundance of caution I have sent a mirror image of my request to House Clerk Suzette Denslow. She asked me to give her more time to respond in light of the Special Session convening on August 18, 2020 and I consented.

I suppose it is theoretically possible that Speaker Filler-Corn instructed House Clerk Denslow to call the Division of General Services and have them remove the artifacts. However, Speaker Filler-Corn told the Washington Post that she hired a Pennsylvania contractor to carry out the removal as well as hiring a “creative consultant” to oversee the project. “The House hired a Pennsylvania company to handle the move but would not disclose the name of the company, the cost of the work or where the sculptures were being taken for storage.”

I don’t think Speaker Filler-Corn should be allowed to spend thousands in Virginia taxpayer dollars and then object that she doesn’t have to say who she hired or how much she spent. There must be a document somewhere.

Dave Webster lives and practices law in Herndon. This column was published originally in The Bull Elephant.