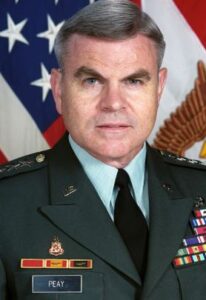 I am a graduate, and proud to be one, of the Virginia Military Institute’s Class of 1961. Since last summer, I and others of the VMI alumni have been pleased to note that Bacon’s Rebellion has published a substantial number of articles concerning the events at VMI climaxing with the publication and fallout from the now infamous Barnes & Thornburg report commissioned by the administration of Governor Ralph Northam. The articles you published have done a great service to VMI and its alumni by, among other things, pushing back against the findings of that report and the libel of VMI in public media, principally in the “news “section of the Washington Post. That libel is that VMI is a systemically racist and sexist institution. …

The attack directed at VMI has no doubt caused injury to many. The reputations of alumni in general have been impugned because of being branded as the product of a systemically racist and sexist institution. The attack certainly raises the question whether young women and minorities in uniform will, rightly or wrongly, fear that VMI officers of higher rank lack respect for them and, perhaps equally unfortunate, transmit that fear into lack of respect for the superior
officer. There is also rightful fear that in this current political environment that VMI’s sullied reputation could harm their opportunities for advancement, particularly for young officers? If this false narrative diminishes the ranks of women and minorities who seek admission to VMI, it will be unfortunate for VMI and for those who are deterred from applying due to this distorted
depiction.

Some may say that the foregoing is merely speculative. There has, however, been one injury that is beyond dispute to VMI alumni — the reputational damage to former superintendent General J. H. Binford Peay III, VMI class of 1962, following his resignation after receiving public rebuke from Governor Northam through a “lost confidence” communication.
Since then the public posture of VMI and the Northam administration, in our collective view, has been to relegate General Peay to the dust bin of history. Their actions do no credit to VMI or the Commonwealth in failing to rise above petty politics to accord General Peay the public recognition he so clearly and richly deserves.

I am the class agent of the VMI Class of 1961. In that capacity I am proud to inform the readers of your blog that, in view of the official silence of VMI since General Peay stepped down, my VMI classmates have taken a step to address the wrongs done to his reputation. The action is, I believe, unprecedented. The class has unanimously adopted at our recent 60th class reunion two resolutions advanced by our 1961 class president, former member of the Virginia House of Delegates and prestigious member of the Virginia Bar, the Honorable Wyatt B.
Durrette.

The first resolution proposes that the VMI Alumni Agencies and The VMI Board of Visitors take actions to honor General Peay for his long and distinguished service to our country, our State and to VMI. How they do that we leave to them.

Our second resolution is more direct. We have nominated General Peay to receive the VMI Distinguished Service Award, the highest award conferred by the VMI Foundation and the New Market Medal, the highest award that can be bestowed by the Institute’s Board of Visitors.

General Peay’s career demonstrates why he deserves recognition. He served in the United States Army for 35 years, beginning as a young lieutenant in Vietnam and subsequently as the commander of the 101st Division in Operation Desert Storm. In the following years in uniform he continued to advance, eventually becoming Vice Chief of Staff of the Army and then to Commander of United States Central Command. In my opinion, except for Gen George C. Marshall, Gen Peay’s record of combined service to the Nation and VMI is unparalleled,
reflecting the values of the Institute.

After retirement from active army service, General Peay contributed his talents to a number of civilian entities often serving as a member of their boards of directors. In 2003 he accepted an invitation from VMI’s Board of Visitors to become its 14th superintendent. In the ensuing years under his leadership, VMI underwent unprecedented growth as an academic institution and in physical plant improvements. The Institute’s endowment contributions increased dramatically. His accomplishments in these areas were acknowledged in 2017 when the Board of Visitors created the Peay Endowment for Academic Excellence.

On the occasion of its creation then President of the Board of Visitors, Mr. William Boland ’73, stated that naming the endowment for General Peay recognized “the exemplary qualities of character and leadership he demonstrated during a lifetime of leadership.” Mr. Boland rhetorically asked
“Who better to exemplify the traits of well rounded, high achieving cadets.”

I share his opinion and know of no finer accolade given General Peay. It rang just as true then as when he was rebuked by the Governor and it rings true even louder today. The Class of 1961 is convinced beyond any doubt that General Peay is eminently qualified to be awarded the VMI Distinguished Service Award and the New Market Medal. He passes muster under the most rigorous application of selection criteria; leadership, duty, honor and devotion. Those qualities of character and ability that already mark him as one whose contributions in public service will be of enduring significance.

VMI’s failure to honor General Peay is a stain on VMI’s reputation and honor, which can be redeemed only by acknowledging his contributions to our Country, State and VMI. The Distinguished Service Award and the New Market Medal were created to recognize the very kind of contributions General Peay made.

Somehow those in the key alumni positions who could initiate the efforts to properly recognize General Peay’s service seem hesitant. The efforts of my
class, now being joined by others, will hopefully create a wave of support they will not be able to ignore.

I have attached a copy of our resolutions. I am pleased to note that, since we adopted these resolutions, individual alumni, and other alumni classes have expressed unreserved approval.