Recidivism: The Rest of the Story, Part 2–Explanations for Increase

A previous post discussed how Virginia’s most recent recidivism rate was an increase over the prior year’s rate. The Department of Corrections (DOC) offers two major possible explanations for the increases in recidivism: more technical violators and more “jail-only” offenders.

The percentage of technical violators making up the recidivist cohort had decreased in recent years to below 10% in FY 2013. However, in FY 2014, the percentage more than doubled to 22.3% and has remained at that level.  After a slight dip in FY 2015, it increased by more than two percentage points in FY 2016.

DOC speculates that the increase in the number of technical violators being returned to prison may be in response to the increasing number of opioid deaths in the community. The basis for this speculation is anecdotal reports of judges declaring that they were returning technical violators who were opioid addicts to prison for their own safety, in the hopes that they would get treatment while in prison. However, two years after first offering this explanation, the department does not have any data to support this speculation.

DOC has calculated that, if the technical violators are left out of the equation, that is, if one considers only released offenders who are returned to prison due to committing a new crime, the recidivism rate of the FY 2016 release cohort would have been 18.2% rather than 23.9 percent.

Jail only. Anyone convicted of a felony and sentenced to incarceration for a year or more is subject to being transferred to a state prison operated by DOC.  Such an offender is said to be state-responsible (SR).

DOC does not have enough prison beds to house all the SR population. In recent years, the SR population has averaged about 38,000, but the average daily population of the state’s prisons was about 30,000, which was close to its operating capacity. Those “extra” 8,000 offenders were housed in jails.

The recidivism rate for SR offenders who served their entire sentence in jails is significantly higher than the rate for offenders who spend at least part of their sentence in DOC facilities (26.9% and 21%, respectively), as shown in the graph below. 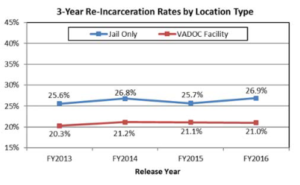 Jails are not designed to hold offenders for long periods of time. Most have no outdoor recreation space. There is little program space. (I once observed an ESL class being conducted in the hallway of a jail.) Most do not allow contact visits. DOC posits that “consistent evidence-based programs, educational programs, substance abuse, and mental health treatments” in DOC facilities, which are not available in many jails, contribute to the lower recidivist rate for offenders who spent time in DOC facilities.

DOC presents some data to support its hypothesis. As shown in the sets of graphs below, the recidivism rates for SR offenders with mental health impairment and offenders with positive opioid tests are much higher for those offenders who served their entire sentences in jails.

Another aspect that needs to be analyzed is the nature of the offense.  According to DOC data, offenders convicted of non-violent crimes, particularly property-related (larceny, fraud, etc.) have higher recidivist rates. Those are the offenders who receive the shortest sentences and are likely to spend their entire sentence in jails. Are the higher recidivist rates for this group a consequence of being “jail-only” or are they related to the nature of the offense? A comparison of the recidivist rates of offenders in this category who were jail-only with offenders with similar offenses who spent some time in DOC facilities would shed more light on the role that jail-only incarceration plays in recidivism. However, DOC has not conducted such an analysis.

The contention that the jail-only population contributed significantly to the increase in the recidivism rate needs further examination because it is not a new circumstance. For many years, a significant number of SR offenders have served their entire sentences in jails. DOC points out, however, that the FY 2016 cohort had a record number and percentage of jail-only offenders.

That brings up the question of why there was a record number of jail-only offenders. Could DOC have mitigated that by bringing in more SR offenders from the jails than it did? The jail-only offenders are generally those with relatively short sentences — 12 to 24 months. To have been included in the FY 2016 release cohort, they would have had to have been convicted in FY 2014 or FY 2015. Historical data on SR new commitments show an increase in those fiscal years and the total size of the SR population increased during those years as a result. Furthermore, DOC data for those years show average daily populations in DOC prisons exceeding 30,000 in FY 2014 and FY 2015. In summary, the record number of jail-only SR releases in SY 2016 was likely not due to anything that DOC could have controlled.

Another factor, in addition to the record number of SR jail-only releases, and perhaps more consequential, was an increase by more than more percentage points in the recidivism rate of the jail-only releases. DOC did not explain why there was such an increase; it only noted it. 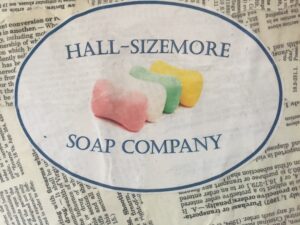 Neither of the issues discussed here is new. In a post two years ago, I went into the recidivism issue in some depth and identified some trends that were concerning. Regarding the overall recidivism rate,  I noted,

“Rather than treating incarceration primarily as a means of punishment, the department has increased the emphasis on preparing offenders for their re-entry into society, while still placing security as its first priority.  Relying greatly on cognitive behavior treatment methods that have been shown to be generally effective, the department attempts to address the faulty thinking processes that resulted in the inmates committing the offenses in the first place…. A great deal of staff training and effort, as well as additional resources, have been devoted to this initiative.”

I went on to point out that, up until then, “the new emphasis has not yet made much of a difference in the recidivism bottom line.” Nevertheless, I made allowance for the time it takes to change the culture of a large organization and to put in place the changes. The FY 2016 cohort was the third one to be fully affected by the new re-entry program. Instead of progress on recidivism, there has been slippage.

After two years, DOC still does not have a verified explanation for this increase.  It continues to offer the vague explanation that it did two years ago: anecdotal accounts that perhaps some judges revoked the probation of opioid users in order to protect them from overdosing. DOC needs to try to find out the factors behind this increase and take steps to reverse it.

The number of new SR commitments decreased after FY 2014, as did the size of the total SR population incarcerated in jails and prisons. In FY 2018, there were about 1,600 fewer SR offenders in prisons and jails than in FY 2014. As a consequence, the number and percentage of released offenders consisting of jail-only SR offenders should have decreased in the years after FY 2016.

The recidivism reports for the FY 2017, FY 2018, and FY 2019 cohorts should show reductions in the overall re-incarceration rate. If they do not, DOC has run out of excuses.