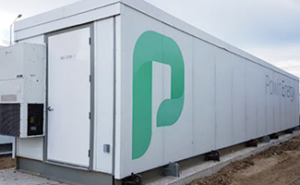 A battery storage facility: not nearly as photogenic as solar panels and wind turbines

The project has a peak capacity of two megawatts and a duration of eight megawatt hours, enough to power about 1,000 homes for eight hours, the coop stated in a press release two days ago. REC provides electricity to 170,000 connections in portions of 22 Virginia counties.

There has been much discussion about large-scale battery storage as a supplement to solar and wind power as Virginia moves to a carbon-free grid by 2050. In theory, batteries will be able to store excess electricity generated by the intermittent power sources and release it when the weather isn’t cooperating. But the aim of the REC energy-storage project, to be located in Spotsylvania County, is more modest. Anticipated benefits include:

These are tangible benefits with a measurable monetary value that will help REC’s electric distribution system work more reliably. REC provided no numbers, however, to indicate the size of the financial investment or the expected return on investment.

By way of comparison, Dominion Energy received State Corporation Commission approval earlier this year to build 16 megawatts of battery-storage for $33 million in four pilot projects. (Assuming a comparable cost per megawatt, REC’s investment should be in the realm of $4 million.) Dominion hopes to understand how best to deploy the batteries to work in concert with variable solar energy generation.

Bacon’s bottom line: It’s one thing to use batteries to help offset the fluctuations in intermittent power generation as clouds pass over solar farms or winds gust through wind farms. The ability of batteries to instantaneously release electricity into the grid upon command will help regulate grid voltage and frequency, which must be kept within tight parameters. That is a high-value use, and it justifies spending the high cost of the batteries.

That’s a much smaller scale of deployment, however, than using electric batteries to store energy for the purpose of meeting daily and seasonal shifts in electric load — say, to store excess solar power generated at noon to continue providing electricity at 6 p.m. when the sun goes down.

Let’s use the REC numbers as a basis for analysis: an estimated $4 million to provide eight hours of electric power to 1,000 homes. Virginia had 3.1 million households in 2019. To build enough battery storage capacity to power every household after solar panels ceased generating electricity would cost about $12.4 billion. That’s just to supply homes, not businesses, and it assumes the sun shines every day without interruption. Factor in several days’ worth of cloudy weather and low solar output, and the need for additional battery storage increases exponentially.

The last thing we need is for Virginia to find itself in a situation similar to California where the headlong rush to a 100% carbon-free future has resulted in rolling blackouts across the state. California’s predicament was fully foreseen and fully man-made. Under state law, Dominion has 15 years to build a zero-carbon system, and Appalachian Power has 20 years. Battery storage will be an inevitable part of the solution. Hopefully the cost will decline in the years ahead, making it more economical to deploy. We don’t know how fast the price will come down, however, which makes the 15-year and 20-year conversion mandates totally arbitrary.

But it makes perfect sense right in the meantime to invest in pilot projects to learn more about how to integrate batteries into the grid.

45 responses to “REC Coop to Invest in Battery Storage”