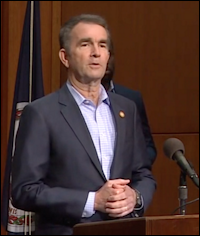 After several weeks of acting with remarkable restraint, Ralph Northam on Monday suddenly gave in to his tyrannical impulses.

He sternly ordered all schools closed for the rest of the academic year.

Someone give this man a calendar. It’s MARCH. On the 13th of this month he ordered the schools closed for two weeks.

“I recognize this will pose a hardship on many families, but closing our schools for two weeks will not only give our staff time to clean and disinfect school facilities, it will help slow the spread of this virus,” he said at the time.

He jumped from that to this?

With one wave of his imperious little hand, The Richmond Times-Dispatch reports, Northam became only the second governor in the nation – after Kansas’ – to close schools through the end of the school year.

What’s the hurry, Governor? It’s not a race.

Four states haven’t closed schools at all: Idaho, Nebraska, Iowa and Maine. Most others have shuttered for a couple of weeks and are re-evaluating.

With yesterday’s hasty and heavy-handed move Northam slyly signaled that the other shutdowns he’s ordered are also going to last months rather than weeks. Almost as if he’s been spoon-feeding his plans to the public rather than being honest.

In the words of William Butler Yeats, “The centre cannot hold.”

In an editorial last week, The Wall Street Journal warned against extending what were supposed to be temporary shutdowns:

Even cash-rich businesses operate on a thin margin and can bleed through reserves in a month. First they will lay off employees and then out of necessity they will shut down. Another month like this week and the layoffs will be measured in millions of people.

Virginians must get back to work. And well before June. Seems like it was just last week we were promised that the shutdowns were limited.

“Fifteen days to slow the spread.” Remember that?

It’s beginning to look like that slogan was a ploy to lure the public into an ugly, indefinite and unpaid vacation.

By practicing social distancing, staying at home and vigorous hand-washing, Virginians may have already flattened the curve of new infections and we don’t know it. After all, testing just began. Everyone expected numbers to rise sharply once tests became available. Surely Northam knew that.

Newly confirmed cases – driving up the daily totals – likely contracted the disease days or weeks ago.

Instead of shutting down more enterprises, Northam and other governors should start making plans to help businesses open with stringent new practices aimed at reducing the chance of spreading the contagion, while asking older folks and those with underlying health conditions to stay home longer.

In a press conference yesterday, Gov. Andrew Cuomo of New York indicated he was preparing to do something like that: “We also have to start to plan the pivot back to economic functionality.”.

If some businesses are resuscitated in a few weeks, what exactly are parents supposed to do with their kids after the governor’s premature decision to close schools?

Many of us quietly feared what would happen once politicians got a taste of limitless executive power in emergency situations. Some of our worst fears are starting to play out.

This column was posted originally at www.kerrydougherty.com.