Racism Investigators Report Use of the N-Word at VMI 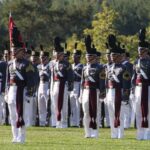 After interviews with 46 Virginia Military Institute alumni, ten members of the Board of Visitors, 14 current and past faculty members, five cadets and four parents, Barnes & Thornburg, the law firm appointed by the Northam administration to probe racism at the military academy, has identified eight individuals who said they either were called the n-word or overheard the use of the n-word over the past 25 years.

On the other hand, “many” cadets and recent alumni told the investigative team they “never heard racial slurs such as the n-word or saw or experienced racial intolerance,” states the interim report of the equity audit and investigation.

Moreover, the report notes that when VMI administrators were alerted to racial incidents, they investigated them and often meted out punishments. An internal VMI document cited in the report described 17 incidents between 2014 and 2020 that had a racial component, most of which entailed use of racial slurs, including the n-word. Thirteen allegations were substantiated, and in each case, offending cadets were punished. Punishments ranged from five to 50 “penalty tours” (an hour’s worth of supervised marching while carrying a rifle), to confinement to barracks, cultural awareness training, written apologies, and loss of rank.

The VMI investigation has a long way to go, as Barnes and Thornburg has many more people to interview and surveys to compile. Evidence of more extensive racism may turn up. But the findings of episodic incidents over 25 years are thin gruel for Governor Ralph Northam, who in launching the investigation condemned what he called “the clear and appalling culture of ongoing structural racism” at VMI, and the Washington Post, whose reporting sparked the investigation, which described “relentless racism” at the academy.

The investigators acknowledge the limitations of their findings. Many of the early interviews occurred with individuals who reached out to the Team and “may be those who feel the most strongly about the underlying issues and are the most vocal.” Also it is important to recognize that authors of the report made no effort to ascertain the veracity of the complaints; they are simply reporting the allegations. But the investigation is still early, and Barnes & Thornburg may turn up more information supporting the racism charges. The investigative team is reaching out to current cadets who might feel intimidated about speaking out. Surveys may turn up unflattering perceptions. And a probe into the role of race in Honor Code trials could turn up evidence of bias.

There were at least two surprising twists to the findings. One is that the treatment of females may be a bigger issue than the treatment of minorities. “A number of interviewees have stated that they thought the real issue at VMI is the treatment of women, including incidents of sexual assault, sexual harassment, and other disparate treatment and harassment based on gender,” stated the report.

According to a July 2020 survey, 8% of female cadets responded that they had experienced some sort of sexual assault — a category of offenses that can range from rape to unwanted touching. (Unstated in the report: More than 26% of college women nationally report being victims of sexual assault, which makes VMI a relative safe haven.) Also, the report noted, female cadets experienced “sexism.” By way of example, the report notes that male cadets sometimes called women “she-dets” or “sheeds,” which is understood to be a derogatory term.

The other twist was the acknowledgement of a divide between cadets, who are predominantly white, and athletes, who are disproportionately black.

One source of tension among the cadets is perhaps not a direct issue of race, but appears to be intertwined with race: the divide between those cadets who participate in NCAA athletics and those who do not. While some alumni observed that “every cadet is an athlete,” alumni and current cadets often refer to this divide as a clear one between “athletes” and “cadets.” VMI’s student body is roughly 6% African-American. However, roughly 60% of African-American cadets are athletes.

Freshmen cadets undergo the “Rat Line” for six months, a harrowing experience similar to basic training, with freshmen as the “rats” and upperclassmen as the cadre. Rats participate in parades, inspections and other military events during the year. Athletes are excused from many of these obligations, exempting them from many rigors of the rat line. Cadets often refer to athletes as “permits,” a disparaging term that alludes to their perceived privileged status.

One mixed-race graduate told Barnes & Thornburg he thought that athletes did not take VMI’s regimental system as seriously and were resented by other cadets as a result. He also believed that athletes were less likely to follow the Honor Code. An African-American graduate, a former athlete, interviewed by investigators reported that athletes were perceived as slackers who attended VMI for the athletics.

“When majority black athletes refuse to conform to the military system at VMI,” said one cadet, “it causes an issue between athletes and non athletes who came to VMI for the military system. … When the majority of those athletes are black, it creates unconscious bias within the corps against black cadets. which is the reason for the issues with race at VMI.”

Some athletes, said another cadet, “get here and do not respect the rules or ratline, and this builds resentment against them. Some of these athletes with this attitude are of color and interpret this resentment as racism. It isn’t. It is due to their attitude, or perceived attitude, of believing they are outside the rules.”

Investigators found that VMI administrators were forthright in official policies and statements that racism would not be tolerated, and the report documented the fact that the administration frequently punished cadets for race-related offenses. However, the Barnes & Thornburg team quoted a handful of alumni and faculty who said that there was a “culture of silence” and that not all racial incidents were investigated.

The final report is due in June.