Questions McAuliffe Will Never Be Asked… But Should Be 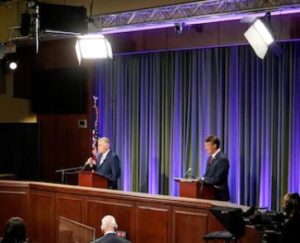 Aspiring Governor Terry McAuliffe has referred to concerns about Critical Race Theory in public schools as a “right-wing conspiracy.” Likewise, the media has downplayed the CRT controversy roiling many school systems by dismissing CRT as an obscure academic legal theory that is “not taught in schools.” That response, of course, is a rhetorical dodge. Radical social justice doctrines, however you label them, are being pushed by the Virginia Department of Education, Virginia’s education schools, many school districts, in staff and teacher training sessions. and sometimes even in classrooms.

Susan Page of USA Today, moderator of the gubernatorial debate between Democrat McAuliffe and Republican Glenn Youngkin last night, missed a chance to pin down exactly what McAuliffe thinks about what is happening in Virginia schools.

Page pressed Youngkin on matters that might put him at odds with elements of his Republican coalition. What is his stance on abortion? Does he think Democrats will steal the election this fall? What does he think about vaccine mandates? All fair questions, to be sure. But, based on media accounts (I did not watch the debate) she failed to query McAuliffe about his views on the most sweeping overhaul of Virginia public education system since the dismantling of Massive Resistance.

Here are some questions she could have asked the candidates.

Do you believe that Virginia public schools are “systemically racist”?

Do you believe that Virginia’s public school system was “designed by whites, for whites”?

Do you believe that Whites benefit from “white privilege”? If so, please define what that privilege is and how it is illegitimate.

Do you believe that there is such a thing as “whiteness”? If so, how would you define the characteristics of whiteness? If they are attributes associated with academic achievement, please explain why Asian-American students excel academically more than Whites? Are Asian-Americans more “white” than White people?

Do you believe that African-Americans and other “people of color” can be “racist,” or can only Whites be “racist”?

Do you believe that public schools should be reorganized around the principles of those who do believe the system is systemically racist, that Whites owe their higher socioeconomic standing to “white privilege,” that Whites are oppressors and inherently racist, and that “whiteness” is something to be decried?

Finally, will you continue Governor Northam’s K-12 educational policies if you are elected governor?

This entry was posted in Culture wars, Education (K-12), Elections and tagged James A. Bacon. Bookmark the permalink.