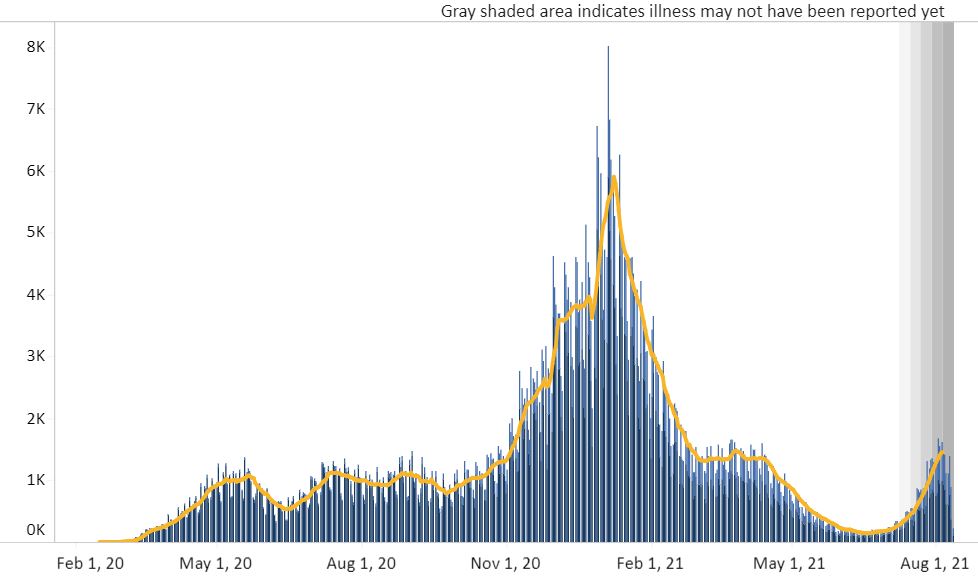 As debates rage over mask and vaccination mandates across Virginia, there is no denying that the spread of the Delta variant has created a spike in confirmed COVID-19 cases. The seven-day moving average of 1,455 (which could grow as late reports filter into the Virginia Department of Health) is only 24% of the winter peak, but it likely still has room to run. There is legitimate cause for concern, and it is reasonable to discuss what precautions should be taken.

What has gone missing from the Virginia media coverage is that the nature of the pandemic has undergone dramatic change — and I’m not talking about the increased infectiousness of the Delta variant. Hospitalizations in Virginia are up by roughly the same amount as confirmed cases, 24%, compared to the winter peak. But the moving average of deaths is running at the rate of only three per day in Virginia compared to 83 at the peak. It appears that after 18 months experience with COVID, physicians and hospitals have gotten much better at treating the illness.

For some reason, those numbers never appear in media headlines.

The decline in fatalities has made not the slightest impression upon Virginia’s myopic political class. By “myopic,” I refer to the fixation on confirmed COVID-19 cases to the exclusion of any other indicators of physical or mental health as well as the refusal to acknowledge that optimizing public health requires making tradeoffs.

Compare the COVID deaths graph below to the confirmed-cases graph above: 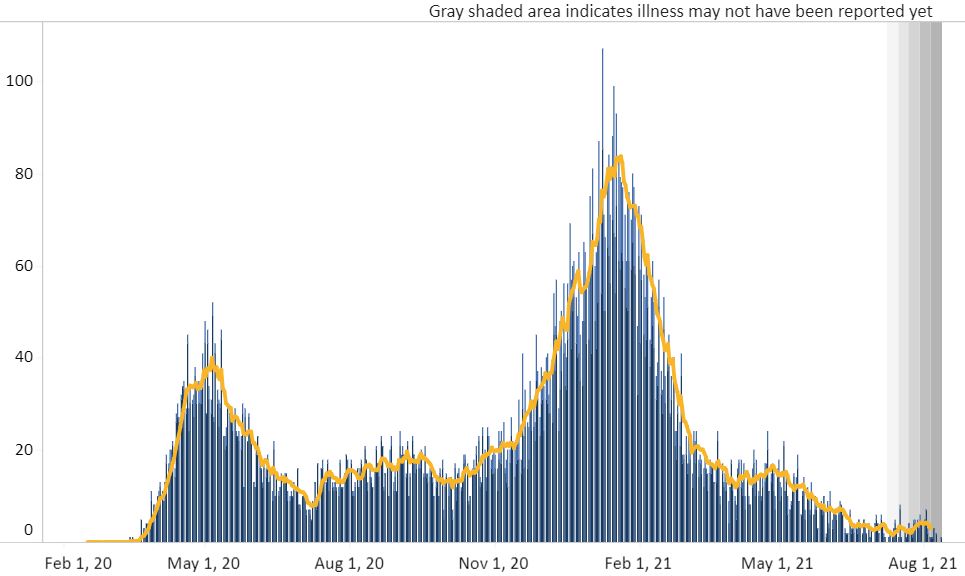 There has been no resurgence in Virginia of COVID deaths.

To see where Virginia is heading, it might be useful to look to the experience of the United Kingdom, where the Delta variant began spreading earlier than it did in the United States. Here’s how the Wall Street Journal news staff summarizes the picture there:

Although caseloads are now ticking higher after Prime Minister Boris Johnson dropped almost all public health restrictions in mid-July, hospital admissions have been falling and deaths are a fraction of the level seen in earlier phases of the pandemic.

One important difference is that the vaccination rate is higher in the U.K. (59% of the whole population) than in the U.S. (about half). Also, about 70% of Britons wear masks, compared to less than half in the U.S. But a third factor comes into play — one that gets almost zero attention in the United States. The Brits collect blood samples from the population to determine the prevalence of COVID antibodies. Says the Journal: “Between 90% and 94% of British adults have some degree of immunity to coronavirus from full or partial vaccination, or prior infection.”

The U.S. does not sample the prevalence of antibodies, and public policy takes no recognition of the fact that prior infections confer resistance to the virus. The level of combined vaccinated/natural immunity in the U.S., population is probably less than that of the U.K. (although no one knows because no one measures it here), which means the virus likely has more latitude to spread. But we can be certain of one thing: between vaccinations and prior infections, antibodies in the U.S. population are far more prevalent today than they were in December. The chances of a December repeat are nil.

Admittedly, COVID resistance is not spread uniformly through the population. Some demographic pockets have been slower to embrace vaccinations and are more vulnerable to a surge. Ballad Health in Southwest Virginia has expressed fear that a spike in cases could overwhelm its hospitals there. But, overall, the moral and ethical calculus of COVID restrictions is very different than it was eight months ago.

The fact is, few people are dying from COVID now. The viral spread is slower, and hospital treatments are vastly superior. Doctors understand how the disease progresses and they have identified the best treatments for different stages. (See my profile of the Eastern Virginia Medical School’s Paul Marik.) At the same time, innumerable studies have documented the cost of shutdowns — from shuttered businesses and lost jobs to deteriorating mental health.

Sadly, the discussion over tradeoffs under the new COVID calculus has become politically polarized. For many, the decision whether to mandate masks or whether COVID survivors should be vaccinated is all too often influenced by one’s political ideology. Democrats say mandates are necessary and good, Republicans say they are bad. While the facts on the ground have changed immeasurably since the winter, the political discourse has not.