Protesters, Stay Away from Hospital ERs 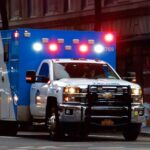 Since Virginia’s lawmakers are determined to waste our money and their time on a special session in Richmond where they’re ramming through laws that should wait until they officially meet again in January, here’s one more to put on their list:

How about making it a felony — with mandatory prison time — to demonstrate, protest or in any way interfere with the entrance to a hospital emergency room? I’ve combed the Code of Virginia and can’t find a statute to cover this.

You might remember that back on June 28th something went down outside the Atlantis Apartments in Virginia Beach. There were conflicting accounts. All of them disturbing.

According to The Virginian-Pilot, a man was badly injured in a motorcycle accident there. When rescue workers arrived, they were hassled by some in the crowd who had gathered around the injured man. In a later Pilot story, the fire chief walked back the account a bit, saying that the crowd was merely “emotional” when someone kicked and pushed fire fighters.

The ambulance carrying the man — who died en route — headed to Sentara Virginia Beach General Hospital and was reportedly met by unruly individuals. The ER went into lockdown from 9:24 p.m. until 1:16 a.m., according to a hospital spokesman.

A city official said later there was no evidence people followed the ambulance, but acknowledged that the hospital was locked down.

In other words, there was some sort of disturbance near the ER that night, but authorities aren’t certain it was connected to the case of the dead motorcyclist.

Imagine if you or a loved one suffered a heart attack in Virginia Beach on that date. Every second counts as you’re being sped to the hospital, but once there you have to deal with morons misbehaving — for whatever reason — in the parking lot.

Deliberately causing such a delay ought to be a crime.

Two deputies were ambushed Saturday evening as they sat in their patrol car outside the Compton Metro Rail Station.

Moments ago, 2 of our Sheriff Deputies were shot in Compton and were transported to a local hospital. They are both still fighting for their lives, so please keep them in your thoughts and prayers. We will update this thread with information as it becomes available.

The hairball that shot them was captured on security tape walking up to the car, pulling out a pistol and coolly shooting two officers in the head. Then he ran away. Police say he got into a car a block away and left.

One of those blasted in the head was a 31-year-old mother of a 6-year-old boy. Her partner is a 24-year-old single man.

As I write this, both officers are alive and “fighting for their lives.” And somewhere in Los Angeles, a little boy is terrified his mother will die.

When the ambulances bearing the critically injured deputies arrived at the hospital, criminals — I’m not calling them demonstrators or protesters — blocked the entrance and chanted “Let them die!”

Update: The gunman walked up on the deputies and opened fire without warning or provocation. pic.twitter.com/cBQjyKkoxJ

The responses to the LA County Sheriffs’ Tweet about the incident are repulsive. A surprising number want the deputies to succumb from their injuries. Social media was filled with hate for the deputies and praise for the shooter.

What the heck is wrong with people? Have we lost all of our humanity?

This attempted assassination of two law enforcement officers cannot be excused because some other police officer somewhere behaved badly. That’s not how justice works.

There is a vocal and lawless minority in this country who loathe the police. They’re dangerous. The rebellion or insurrection that’s been building all summer should have been put down in June. It wasn’t, and an assortment of freaks — like this shooter in LA – now feel emboldened.

On top of that, America’s anarchist hooligans seem to believe that blocking hospital entrances and intimidating ordinary decent people in need of emergency medical care is just another way to stick it to the man.

This entry was posted in Crime , corrections and law enforcement, General Assembly and tagged Kerry Dougherty. Bookmark the permalink.

25 responses to “Protesters, Stay Away from Hospital ERs”