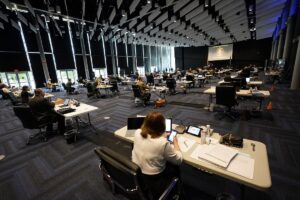 Although there is not an official “cross-over” deadline for legislation in the special session, each house of the General Assembly seems to have largely completed consideration of its own bills. Thus, this is a good time to review their progress on enacting the Democrats’ agenda on criminal justice reform and revising the budget.

I have prepared a table (available here) listing all the major bills and the actions of each house. As is usually the case in legislative sessions, there were multiple bills introduced on some subjects. The usual procedure is to pass only one bill and “incorporate other bills into it, giving credit to the incorporated bills in the header. Accordingly, when there were multiple bills on an issue, I have listed only the bill that was selected to go forward.

In order to be somewhat consistent, I have used the same format that I used previously in summarizing the announced criminal justice reform agendas. I have also included several issues that surfaced during the session that were not on that agenda.

HB 5148, expanding earned sentence credits.  There could be a significant cost to implement this bill. However, no fiscal impact statement was prepared. Indeed, there was no time to prepare a FIS because this bill was on a fast track unusual for even a special session. It was reported from the Courts of Justice Committee the day after it was introduced and, two days after that, it was reported from Appropriations to the floor. Within an interim of eight days, there were four versions of the bill, with the last version presented as a substitute on the House floor. It is doubtful that any member of the House knew how many offenders the final version of the bill would affect and the patron admitted in his remarks that it was unclear what the cost would be.

(For my discussion of the implications of this legislation for the state’s criminal justice system, see here. The full House spent about seven minutes debating this bill on second reading.  One Republican offered sort of half-hearted opposition to it. On third reading, final passage, there was no debate. In contrast, there was at least an hour of debate on both second and third readings on HB 5049, prohibiting police from acquiring military-style weapons and restricting the use of tear gas, with Republicans waging active opposition. The priorities of the members are frustrating to me sometimes.)

On the other hand, the FIS for the Senate counterpart (SB 5034) estimated a cost of at least $1 million to make the needed changes in DOC’s automated systems plus ongoing costs for additional probation officers.

Furthermore, although DOC estimates that it would take about two years to make the needed changes to the codes in its systems, the House bill would become effective July 1, 2021, less than a year from now.

The General Assembly seems, at best, to be treading water regarding the budget, according to reporter Michael Martz of the Richmond Times-Dispatch. This is after almost a month after convening in a special session supposedly for the primary purpose of “fixing” the state budget after the pandemic caused a significant decline in state revenues.

Not only does neither house seem to have a plan, there is no process in place for reconciling their differences and adopting a final budget, and the budget committees in the House and Senate are not talking to each other.

At the end of September, state agencies will have gone through a quarter of the fiscal year without knowing the amount of money they will have to work with during the year. Local school divisions do not know how much state assistance they will receive. Institutions of higher education do not know how much general fund assistance they can count on. Depending on what changes, including cuts, the General Assembly makes, these entities will have no more than nine months to implement them. This sort of uncertainty makes it hard to plan an agency’s activities for the year. The governor could have easily avoided this situation if he had followed the practices of his predecessors and dealt with the budget shortfalls administratively and not called a special session of the legislature.

To top it all off, as soon as the special session wraps up (assuming that it will), agencies will be asked to go through a regular budget development process, submitting proposed budget amendments to the Governor for consideration for inclusion in his 2021 budget bill and the Governor’s Advisory Council on Revenue Estimates will be meeting with the governor to develop another revision of the revenue estimates for the 2021 legislative session.

This entry was posted in Budgets, Crime , corrections and law enforcement, General Assembly and tagged Dick Hall-Sizemore. Bookmark the permalink.