Prioritize Vaccine by Age, Not Race

The last thing the government needs to do is polarize citizens by prioritizing COVID-19 vaccination for favored races and ethnicities. Statements like those of Harald Schmidt, assistant professor in the University of Pennsylvania Department of Medical Ethics and Health Policy, amount to reverse racism.

“Older populations are whiter,” said Schmidt, as quoted in the New York Times. “Society is structured in a way that enables them to live longer. Instead of giving additional health benefits to those who already had more of them, we can start to level the playing field a bit.”

Those who decide who gets the vaccine should not consider race or ethnicity. Health departments should target those who, by virtue of their occupations and age, are the most vulnerable to catching and spreading the virus. Where possible, because there won’t be enough vaccines to do everything right away, priority should be given to those who, by virtue of their age and co-existing conditions, are most vulnerable to dying from it. Insofar as African Americans and Hispanics disproportionately work in exposed occupations or suffer from medical risk factors, they will be more likely to qualify for a vaccine — but not because of their race and ethnicity. 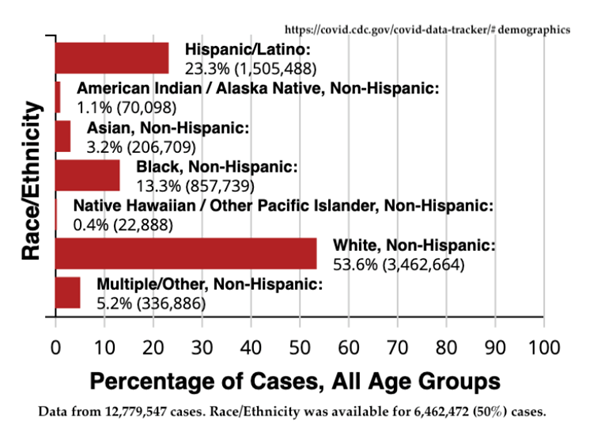 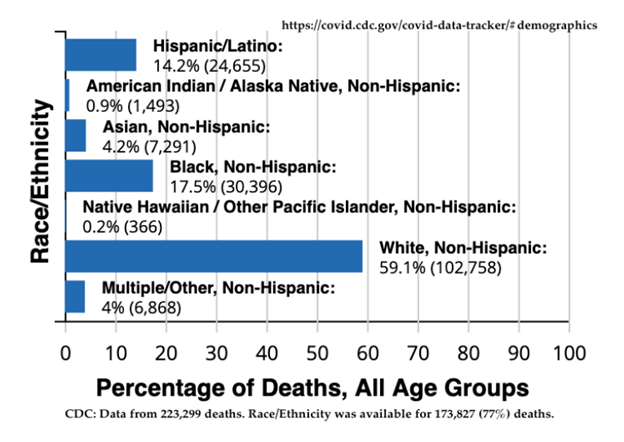 Aside from the questionable morality of consciously favoring people of one race over another regardless of individual circumstances, basing vaccine distribution on the basis of race/ethnicity is a tricky proposition for other reasons. For starters, the data is incomplete. Nationally, the Centers for Disease Control have data for only 50% of all cases and 77% of all deaths. It is hard to know how closely the reported numbers track reality.

Let’s look at the facts that CDC does have. We know that age matters: 95.3% of all who died of COVID were older than 50 years. Nineteen of 20 deaths occurred from just one-third of all cases. 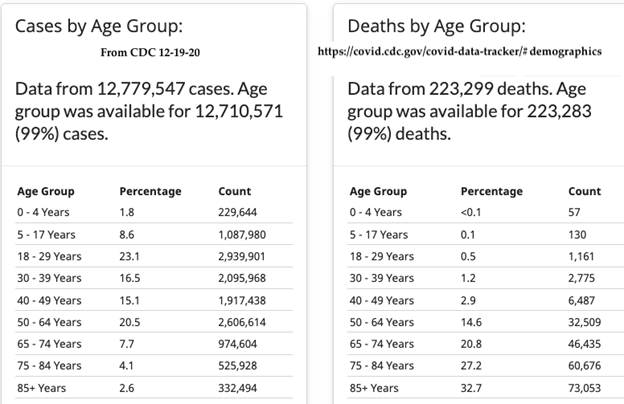 Prioritize all those over 55 who are still working, then as vaccine is available, add those 50-54.

Ninety-four percent of workers 55 and older were working in November 2020. The Bureau of Labor Statistics reports that there were 37.24 million of them in 2019.

Whatever their roles in society, workers are supporting themselves and their families. They are keeping what’s left of the economy alive and supplying the needs of the nation. If there’s not enough vaccine for the entire 50-and-over workforce, give a higher priority to those who must interact with the public, whether that’s in health care, emergency services, law enforcement, transportation, education or retail, until the supply catches up.

That’s an appropriate way to level the playing field.

Update. The CDC Advisory Committee on Immunization Practices (ACIP) voted 13-1 yesterday, December 20, to recommend the next groups for COVID vaccine. The committee previously had recommended Phase 1a to vaccinate an estimated 21 million U.S. healthcare workers and 3 million residents of long-term care facilities.

The new phased additions to the recommendation are:

Phase 1b: 30 million front-line essential workers and 21 million adults aged 75 years and older “When overlap between the groups is taken into account, Phase 1b covers about 49 million people, according to CDC.”

The article announcing the recommendations at Medscape.com said:

This entry was posted in Demographics, Public safety & health and tagged COVID-19. Bookmark the permalink.