Print Me a House 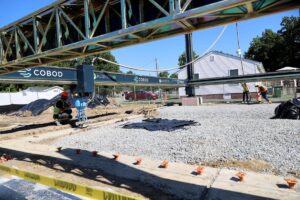 For someone who stays away from housing issues, I now have my second one in two days. Yesterday, I expressed dismay at the price tag on new “affordable” homes. Today’s topic is 3D printed homes.

As strange as that may sound, the Richmond Times-Dispatch reported yesterday that work has begun in Richmond on the “first house in Virginia partially constructed using a 3D printer rather than lumber.”

I have trouble wrapping my mind around this concept.  =As I understand it, the “printer” is a large contraption that lays down concrete, rather than ink or toner, in precise patterns that have been programmed into a computer. The concrete is then smoothed out with a different nozzle that has a scraper attached. In the case of this house in Richmond, the printer is laying down layer after layer of concrete to “print” the outer walls of the house. The interior walls will be constructed by more traditional means.

Providing the innovation and the funding, and taking the risk, is not a private sector entrepreneur, but the government. Virginia Housing, a quasi-governmental agency that was previously known as the Virginia Housing and Development Authority, has taken the lead on this project. It provided a $500,000 grant to the Virginia Center of Housing Research at Virginia Tech to pursue the project. Tech contracted with a 3D consultant, who used most of the grant money to buy the 3D printer from a Danish manufacturer. The other participants in the project are two nonprofit organizations and a traditional contractor.

Once the process is perfected, the project will be able to produce energy-efficient homes at a cost that is significantly lower than that for homes built in the traditional manner. There is only one downside for society: it requires significantly fewer workers, i.e. jobs.

This entry was posted in Housing, Science & Technology and tagged Dick Hall-Sizemore. Bookmark the permalink.