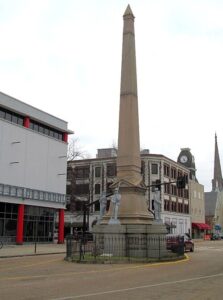 Every time I pick up a newspaper I find myself thinking, If only they had real editors.

I had that thought yesterday when the local newspaper published this online:
“A man was hurt when one of the statues fell from the Portsmouth Confederate monument.”

A statue didn’t FALL from the base of the Confederate monument. It didn’t blow over in a wind. It was toppled by vandals wielding sledge hammers.

And proof, once again, that words matter.

What happened Wednesday night in Portsmouth was a disgrace.

The police – under orders by some unnamed “elected official” according to The Virginian-Pilot – had been told to stand down. And so they did. As a consequence, an unruly mob armed with spray paint and swinging mallets swarmed all over the monument that has stood at the corner of High and Court Streets for 127 years.
So unnecessary.

The General Assembly passed legislation that this year that allows localities to remove offensive monuments. Legally and safely.

But the foaming social justice warriors couldn’t wait for the city council to act lawfully. Instead they destroyed a monument that’s listed on the National Register of Historic Places.

I wrote about that monument in 2015 when city officials wanted to remove it. At the time, state law didn’t allow cities to take down statues or markers.

I pointed out that the 35-foot tall monument was made of North Carolina granite and the four figures around the base depicted the four branches of the Confederate military. It’s one of only three memorials in the South honoring Confederate sailors.

It’s emblazoned with the words, “To Our Confederate Dead.”

Monuments to the dead are not the same as statues of Confederate generals. These are places of remembrance, erected by grieving widows, parents and children who lost men in that bloody war and had no bodies to bury, no graveyards to visit.

Portsmouth sent 1,242 men to war and 199 never came back. This monument was built in their memory with the pennies, nickels and dimes collected by the Ladies Memorial Aid Association over more than a decade.

None of this mattered to the protesters bent on destruction Wednesday night. They were having a party, mugging for the cameras and setting fires, until their reckless behavior sent a man to the hospital.

If the monument is deemed offensive in 2020 — and clearly it is — there’s a solution. The city can have it removed.

Norfolk Mayor Kenny Alexander announced last night that a similar monument in his city would be down within 24 hours. It is destined for Elmwood Cemetery, an appropriate place for it.

If anyone is caught climbing Norfolk’s much taller monument, they will be stopped, the mayor said.

Defacing public property and beheading statues are crimes. Beyond that, those actions left Chris Green fighting for his life. He’s married with children. I hope he makes a full recovery.

Channel 13 news said his wife, Tonieh Brisbane-Green, “supports people’s right to protest, ‘but do it in a peaceful manner. There was no need to do all of that especially while there were so many people around that statue knowing that somebody’s going to get hurt’.”

Ms. Brisbane-Green told the TV station that “she hadn’t decided if she would pursue legal action against the city.”

The city? Not the vandals?

This is what happens when the police, who are supposed to keep the peace and protect the public, are told not to do their jobs. If that’s truly what happened here and if Mr. Green was just a bystander, the city may very well be liable for his injuries.

This entry was posted in Crime , corrections and law enforcement, Culture wars and tagged Kerry Dougherty. Bookmark the permalink.