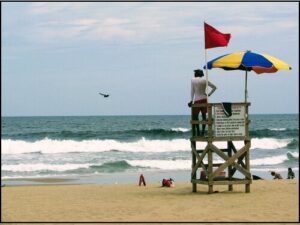 Virginia Beach is back.

At his press conference yesterday Gov. Ralph Northam bent to pressure from irate local politicians, desperate resort businesses and an increasingly disgruntled public by announcing that city beaches could reopen in time for Memorial Day.

“This is the tonic people need right now,” an ebullient Beach Mayor Bobby Dyer told me last evening. “People have been confined for months. Beaches to the north and south of us are open. This had to happen.”

Northam had promised a decision on beach openings on Monday. But Dyer became worried Saturday night when he saw a newspaper photo that seemed to show throngs of people shoulder-to-shoulder on the beach.

“I was down there from 2 to 4 on Saturday and it wasn’t like that,” Dyer said, explaining that when shot with a long camera lens, perspective on crowd size can be distorted.No kidding.

Anyone else remember the images that claimed to show crammed Jacksonville beaches last month – photos that sent the lockdown-forever crowd into orbit – when in reality people were giving each other plenty of room?

“People were lying out, safely spaced,” Dyer said, “They weren’t hurting anyone.”

The mayor recalled a similar long-lens news photos of the Boardwalk in March that angered the governor and caused him to close the beaches. Dyer didn’t want that to happen again so he sent the drone images to Northam on Sunday.

Quick thinking. And it worked.

On Monday morning at about 8, the governor invited the mayor to his afternoon press conference and allowed Dyer to make the announcement.

Dyer’s been engaged in a delicate political balancing act for the past month, lobbying the governor to open the beaches, while resisting calls from impatient residents to engage in civil disobedience to force Northam’s hand.

In the end, it appears Dyer’s conciliatory approach worked, just in time for one of summer’s biggest weekends.

“I truly wish restaurants were open,” Dyer said wistfully, “but the bottom line is the beaches are open and outdoor dining is happening.

“We’ve got to play by the rules while we wait for the next phases of reopening.”

For reasons that are not completely clear, Norfolk’s beaches will remain closed to sunbathers.

Virginia Beach will be reopening with more of Northam’s iron-fisted rules.

For instance, parking lots can only be at half capacity and beachgoers can’t play “group sports” because apparently volleyball means DEATH. Umbrellas can’t be grouped together, so look for skin cancer rates to soar as beachgoers forego those colorful sunblocks.

Oh, and no music speakers allowed on the beach.

Apparently the virus gets excited by tunes.

Naturally, the governor’s ruling also came with an authoritarian threat to remind the proles of who’s in charge: “If people swarm these beaches and ignore social distancing rules or the regulations the city has put into place, I will not hesitate to reinstate Phase I restrictions or even close the beach outright if necessary.”

With that, Northam demonstrated once again the need for the legislature to strip Virginia governors of most of their vast emergency powers, or at least limit the length of time they can exercise them. No governor should have limitless one-person authority for months or even years that’s not subject to legislative oversight.

While Northam is concerned about the behavior of beachgoers, many of us are far more worried about the governor’s dictatorial impulses.

This entry was posted in Business and Economy and tagged COVID-19, Kerry Dougherty. Bookmark the permalink.

27 responses to “Pass the Coppertone”