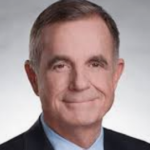 Dominion Energy announced today a $1.2 billion loss in the quarter ending June 30, largely reflecting the cost of writing off its spending on the defunct Atlantic Coast Pipeline project. Operating earnings (before write-offs and other adjustments) were $706 million.

The difference between reported losses and operating earnings for the first three months, states the company in a press release, “was primarily attributable to impairment-related charges associated with the Atlantic Coast Pipeline and Supply Header projects and net gains on our nuclear decommissioning trust funds.”

That would put the loss from the ACP on the order of $2 billion. The press release did not go into details. But aside from massive legal and P.R. expenses, Dominion had pre-ordered large volumes of specialty steel and lined up union construction crews in anticipation of commencing work on the project.

In a separate announcement, the company said that Thomas F. Farrell II, 66, will step down as CEO to serve as executive chairman. He will be replaced as CEO by Robert M. Blue, executive vice president and co-chief operating officer. Farrell took the job as CEO in 2006.