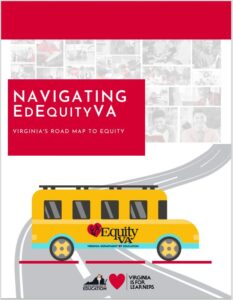 The Northam administration is pushing through the greatest transformation in Virginia’s K-12 public education system since the end of Massive Resistance. Unless you read Bacon’s Rebellion, you likely know nothing about this. The establishment media is not covering the biggest K-12 story of our generation.

Northam’s goal is nothing less than achieving “educational equity,” or equal outcomes for all races and ethnicities. Not equal opportunity for all, not equal resources for all, but equal outcomes.

According to a newly published document, “Navigating EdEquityVA: Virginia’s Road Map to Equity,” education equity is achieved when “we eliminate the predictability of student outcomes based on race, gender, zip code, ability, socioeconomic status or languages spoken at home.”

The key assumption underlying this push is that the United States — and Virginia is no exception — is a systemically racist country. Thus, “anti-racism” is a core component of the overhaul of the state’s public schools. However, anti-racism is not defined in a way that most Virginians would understand it: as opposing the expression of bias against minorities. The Northam administration explicitly uses a definition straight out of cultural Marxist theory prevalent in academia. Anti-racism, proclaims the document:

Acknowledges that racist beliefs and structures are pervasive in all aspects of our lives and requires action to dismantle those beliefs and structures. This requires that school leaders hold educators and students accountable when they say and do things that make school unsafe, and that they dismantle systems perpetuating inequitable access to opportunity and outcomes for students historically marginalized by race.

Northam and his education leadership team — Secretary of Education Atif Qarni, James F. Lane, superintendent of public instruction, and members of the State Board of Education — have embraced this mono-causal explanation of what ails Virginia’s educational system and what needs to be remedied. When racism is the root cause of unequal outcomes, racism must be rooted out. Other possible explanations for unequal outcomes — failed pedagogies, dysfunctional administration of failed school districts, the breakdown of traditional family structures, the challenges of poverty, the influx of immigrants with minimal English language skills, many here illegally — are downplayed or ignored entirely.

The potential tragedy is that if the Critical Race Theory (CRT) prognosis of what ails Virginia education is wrong, then the remedies will be misguided, even counterproductive. Thus, rather than address real underlying problems such as ensuring that young children keep pace with their reading and math levels as they progress through school, the CRT wrecking crew is dismantling test-based criteria for admitting children into elite governor’s high schools on the grounds that not enough “marginalized” minorities make the cut.

The pernicious attributes of an ideology that views everything through the prism of race are obscured by language in the report that everyone can accept. “Virginia is for ALL learners,” proclaims a headline on the page summarizing the Virginia Department of Education’s mission, vision and core values. “It is our responsibility to maximize the potential of every student,” writes James F. Lane, superintendent of public instruction, in the introduction to the Navigating EdEquityVa Roadmap.

Of course the public school system should be inclusive and geared to maximizing the potential of every student. But helping every child achieve his or her potential is a far cry from calling for “racial equity” or “racial justice” as defined by cultural Marxists.

As a practical matter, “Navigating EdEquityVa” advocates revamping discipline systems to ensure that black students are not punished disproportionate to their numbers in the student body, to increase the number of African-American teachers, to enroll more African-Americans and Hispanics in advanced academic programs, to create “culturally competent” educators, and to reengineer curricula to make it more culturally sensitive.

The document also describes in vague bureaucratic language the movement to reprogram how people think about race and ethnicity, and how to reallocate human and financial resources to “advance equity and inclusion in school communities.”

There is much more to say, and I will delve into the various initiatives unleashed by the Northam education team in future posts.

This entry was posted in Culture wars, Education (K-12). Bookmark the permalink.